A Worthy Daughter Of Dominic 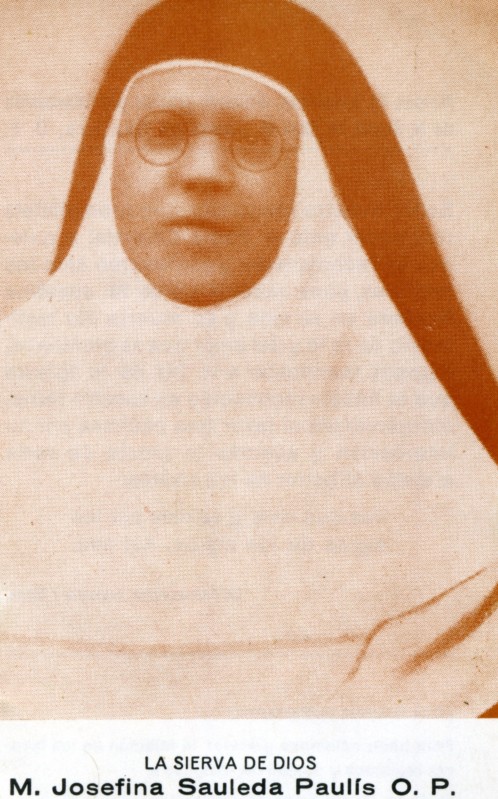 In yesterday’s post I looked at the life of the former Dominican Master General who was martyred in the Civil War, Blessed Buenaventura Garcia Paredes, as I was doing so I thought of another Dominican martyred in the conflict, one who made history, even if in a negative way.   This was Sr Josefina Sauleda Paulis, the first cloistered Dominican nun to be martyred for the Catholic faith.

By the way, I know I have exploring these martyrs and I have been benefiting from it, but I hope, that regular readers are not pulling their hair out in frustration and want something controversial to get the juices going.  I think the example of these Catholics is important – we face many assaults to our faith and while we may never have to face what these brothers and sisters had to face, their courage can inspire us – and we can call on their intercession when we too are being tested.  Take these days as a little retreat with the contemporary martyrs of the Church so we may be encouraged and edified.

I’m sure Blessed Josefina never thought that she would make history within her Order, but her life seemed directed towards a heroic witness to Christ right from the beginning.  Born Ventureta Martha Francisca Sauleda i Paulis in San Pol de Mar near Barcelona on the 30th July 1885 to Victoria Sauleda i Roura and Josepa Paulis i Roura, she was baptised six after her birth.  At the age of two she was confirmed, and received her First Holy Communion when she was twelve.

Both of her parents were devout, but it was her mother who took charge of the children’s religious instruction, and she impressed on them the importance of personal prayer as simply speaking with God.  Here lay the seeds of Ventureta’s contemplative vocation.  Attending the Dominican College, the young girl excelled in her studies and reflected on the life of the sisters which she found deeply attractive.   When she finished school she had made up her mind to give her life to Christ – but where? She had a desire to serve Christ in an apostolic congregation, but there was also another desire: she yearned for the contemplative life.  At the suggestion of her spiritual director she decided to do a series of spiritual exercises to help her discern: when she had finished she found the call to the cloister to be the deeper one.  She knew which Order she was called to: the Dominicans.


On the 19th January 1905 she entered the Dominican Monastery of Mount Zion in Barcelona, there to spend the rest of her life in prayer and quiet service.  On the 12th March she received the habit and was given the name Sr Maria Josefina.  She made her first vows on the 24th March 1906 and solemnly professed on the 12th April 1909.  She settled down into community life, fulfilling her duties, dedicating her life to prayer and penance.    She was noted for her ability, charity and kindness.  On the 21st June 1929 she was elected Prioress, and re-elected in 1932.  Standing down having served two terms, she was appointed Mistress of Novices in 1935.

As the community was at prayer on the morning of the 19th July 1939 their meditation was disturbed by the sounds of bullets outside the monastery.  When they opened the church for Sunday Mass, no one came – the revolution had started and people were staying in their homes.  The day was eerie – the battle for Barcelona was in full swing, the communists would win.  When evening came their neighbours called into the sisters and urged them to leave the monastery- they would take them into their homes – the Prioress agreed, and the community dispersed into the homes of their neighbours who took every precaution to protect them.  The next morning the sisters returned to the monastery – their chaplain arrived and they had Mass after which he urged them to leave and take refuge in safe houses. They did so.

The Prioress, Sr Josefina and a small group took refuge in an empty apartment not far from the monastery, and from there witnessed the violent attack on the monastery carried out by the communists on Tuesday 21st July.  A police check on the apartment passed over as the chaplain posed as the owner.  The Prioress was quite old and the sisters urged her to go into the country, back to her village where she would be safe.  Having persuaded her to do so, Sr Josefina was elected as temporary Prioress.


Realising they were in real danger, Josefina was looking for a safer refuge and the little group moved, and they lived safely in there new accommodation until the end of August.  On the 31st August, Sr Josefina and another sister had cause to go back to the apartment to collect some belongings.  As they passed the damaged monastery, a look of pity registered itself on their faces and it was noticed by some communists who were hanging the street.  While the two nuns were in the apartment, the militia had been contacted and they entered the building.  They caught Sr Josefina who was downstairs and arrested her.  She was taken to a prison building and there interrogated for twelve consecutive hours: they thought she was the Prioress of the monastery and wanted to know where she had hidden the monastery’s wealth and where the chaplain and other sisters were hiding.  She remained silent, infuriating her captors who turned violent and threatened her.   Realising she would not talk they bundled her into a car and drove off.

The next day Sr Josefina’s body was found on display in the Hippodrome.  A placard around its neck declared that here was the Prioress of Mount Zion Monastery and her name was Sauleda.  It was brought to the local morgue where the sacristan of the monastery discovered it and informed her family.  Her remains were unrecognisable – her face had been completely torn up – it was obvious that she had been brutally tortured before she died.   A bullet was found in her head, and her face torn – the coroner concluded that her face had been torn apart with instruments of torture, and she as then shot in the head.  Years later one of those who tortured her came forward and revealed that she had endured great suffering with prayer and forgiveness and had died at dawn on the morning of the 1st September.

Sr Josefina was the first cloistered Dominican nun to be martyred, she was beatified on the 28th October 2007.
Posted by Father Director at 8:00 AM