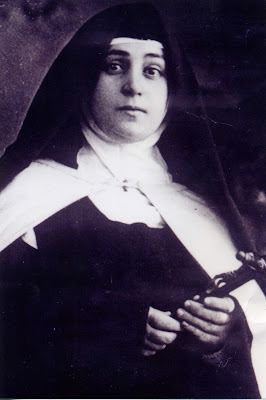 As I am writing about our Carmelite sisters who were martyred, I had better dedicate this post to the fifth sister who has been beatified.  Whereas the sisters of Guadalajara and Blessed Mercedes died on the 24th July 1936, our next Beata, Maria Sagrario died a few weeks later, on the 15th August.

Elvira Moragas y Cantarero was born in Lillo near Toledo, on the 8th January 1881,  the third of four children born to Ricardo Moragas, a pharmacist, and his wife, Isabel.  When she was five, her father was appointed the pharmaceutical purveyor to the royal family, and so the Moragas family moved to Madrid. Intrigued by her father's work, Elvira wanted to become a pharmacist herself.  Few women in Spain at the time managed to get themselves into the professions, but Elvira was determined, and she became one of the first women in Spain to be admitted to the pharmacy degree and graduate with the qualification.  She completed her degree with distinction, and went to work with her father.  When he died, she continued her work and her professional ability became apparent.

God, however, had other things in store for her.  She discerned a vocation to the Carmelites, and made up her mind to enter.  Her spiritual director asked her to wait for a while: her younger brother was still in need of her help, so she had a duty to him; she agreed.  In 1915 she finally entered the Order, joining the Community in the Monastery of St Anne and St Joseph in Madrid.   On the 21st December of that year she received the name Sr Maria Sagragrio of St Aloysius Gonzaga and began her novitiate, taking first vows on the 24th December 1916.  She was solemnly professed on the 6th January 1920.

Sr Maria Sagrario excelled in the monastery.  Her pharmaceutical skills came in handy, but it was her devotion to the contemplative life, her virtues and wisdom which impressed the sisters.  So much so, she was elected Prioress in 1927.  In 1930, her term over, she was appointed Mistress of Novices: again she excelled.   On the 1st July 1936 she was re-elected Prioress.

Two days later the terror began.  Madrid was in an uproar as the anti-Catholic persecution seemed to grow with even more fury every day.   Sr Maria Sagrario, concerned for the care of the sisters, was making plans to disband the Community and find safe havens for them.  On the 20th July a mob attacked the monastery: it was time to get the sisters to safety.  With great heroism and efficiency, Maria Sagrario spirited the nuns to various safe havens and told them to stay hidden until the rage passed.  The nuns, though terrified themselves, saw the serenity of their Prioress.  They also noted, and testified later, that Maria Sagrario was completely open to the will of God and was willing to accept death in order to protect the sisters.

Maria Sagrario took refuge with another sister's family.  Her brother asked her to come and stay with him, but she refused - she had to stay where she was.  On the 14th August the house was raided by Republicans who arrested the two sisters.    As Prioress, they were interested in questioning her - having rumaged through the monastery they did not find any valuables.  They tried to force her to tell where they were: Maria Sagrario remained silent.  When asked as to the whereabouts of the other sisters: again, Maria Sagrario remained silent.  The question process was rough and she was threatened: yet she remained serene.

The next day, the Solemnity of the Assumption of Our Lady, she was taken out to a prarie, the Pradera of Saint Isidro where she was shot.  God accepted her sacrifice: the sisters of the community survived the presecution.
Posted by Father Director at 8:00 AM