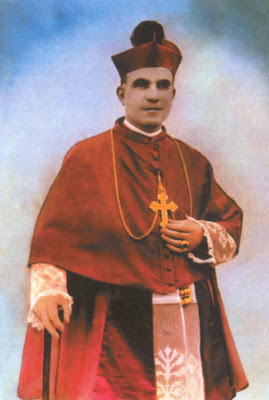 Of all the dioceses of Spain, none would bear the brunt of the anti-Catholic persecution of the Republicans as badly as the diocese of Barbastro in the north.  The diocese lost the vast majority of its diocesan priests (85 % of them, I believe), and many religious priests and brothers shared in the same fate.  The bishop of the diocese, Florentino Asensio Barroso was also martyred, joining twelve of his brother bishops in shedding his blood for Christ during the conflict.

Florentio was born in Villasexmir near Valladolid on the 16th October 1877, the son of a shopkeeper Jacinto Asensio and his wife Gabina.While still very young his family returned to their original town, Villavieja del Cerro, and there the young Florentino grew up fostering a growing attraction to the priesthood.  When old enough he entered the seminary in Valladolid, excelled in his studies and was ordained priest on the 1st June 1901.  He was first assigned to the parish of Villaverde de Medina, and then two years later, to Valladolid as chaplain to the Sisters of the Poor and archivist in the episcopal palace.  Spotting the young priest's talent, Bishop Jose Maria Cos y Macho appointed him as his secretary.   He then served as a professor of theology in the University of Valladolid and as priest in the cathedral.  It was his ministry in the cathedral which brought him to the attention of figures in the Church.  His pastoral zeal and ministry as a preacher were noted by many including the Papal Nuncio.

When the diocese of Barbastro became vacant in late 1935, Fr Florentino was informed that the Pope was going to appoint him as the new bishop.  The priest was thrown into turmoil - he did not see himself as worthy of the position and did not believe he had the ability to fulfil the duties of the office.  A flurry of letters criss-crossed from the cathedral residence to the nunciature.  However the nuncio was convinced that he had picked the right man and so urged Fr Florentino accept in obedience to the Pope: he relented.

On the 26th January 1936, Florentino was consecrated bishop in the cathedral of Valladolid and took possession of his See by proxy on the 8th March.  A solemn entry into the cathedral was being planned for the 15th March, but with tensions high and made aware that anti-Catholic demonstrations were being planned to disrupt the ceremony, the new bishop quietly entered his cathedral, celebrating only the necessary rites.

He served just under five months as bishop, and in those months his zeal, tact and heroism reveal that he would have been a most remarkable bishop.  He preached in his cathedral every Sunday, encouraged pastoral initiatives among the faithful and had a particular concern for workers and their rights.  He was a bishop who would have been prepared to listen to those among the Republican movement who sought justice for the poor had they given him a chance.  But as a Catholic bishop his cards were already marked.

When the Civil War broke out, Bishop Florentino was confined to his palace. Arrested on the 22nd July, he was taken into custody with numerous other priests and religious.  From his cell window he could see the havoc which was invading the city.  On the 8th August he was taken into solitary confinement in the city jail, and there began his via dolorosa.

He was brutally interrogated, abused and mocked, and during one session he was castrated in full view of all present.   As his persecutors pushed him around they ridiculed his faith.  One said to him "Do not be afraid.  If what you preach is true, you'll go to heaven soon!"  "Yes", the bishop replied, "and there I will pray for you".   The next morning, at dawn, he was put on a truck with a number of other Catholics, among them the Gypsy Blessed Ceferino Jimenez Malla, taken to a cemetery and shot.  He was buried in a mass grave, but after the Civil War his remains were identified by his initial on his underwear, and brought to his cathedral in Barbastro for burial.

Blessed Florentino was beatified by Blessed Pope John Paul II in 1997.  His feast is the 9th August, the day of his martyrdom.
Posted by Father Director at 8:00 AM