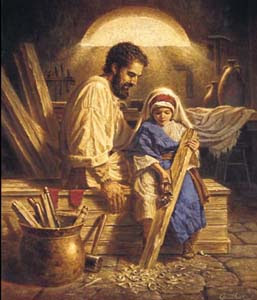 Happy feast day to you all: today is of course the optional memoria of St Joseph the Worker (I think that needs an upgrade - it should be a memoria at least).  Every blessing to all our workers who, like St Joseph, faithfully serve their families, their society and God through their toil.  Through the intercession of St Joseph may they be sanctified through their work and encourage others to see the true dignity of man and woman revealed through honest labour.

I see the case of the Chinese dissident is causing problems for both the US and China: he is the elephant in the parlour as the two countries work out their trade deals.  Human rights tend to get in the way of economics, so best to ignore them - at least that is the message that seems to becoming out of Ireland, the US and other countries who covet China's business.  Another reason why Chen Guangcheng might not be top of Barak Obama's Christmas card list is because the dissident is opposing China's forced abortion and sterilisation policies.  Seeing as Obama, Sebelius and their cohorts are trying to force Catholics to pay for contraception and abortaficients the parallels are just a little too similar for comfort.  Lucky then that they can "eat around" the issues.

In other news, I refer you again to Christopher McCamley's blog: he's been doing a bit of investigation into the ACP and how they run their website.  It seems, despite all their talk of tolerance, censorship and their anger over priests being silenced (they were censured - different thing), they employ a rather tough line in censoring the comments that are left on their site: they delete those comments they don't agree with.  What's new?  Self-styled liberals tend to be the most illiberal of all.  Indeed a friend of mine refuses to call them liberals or progressives because they actually want to limit freedom and make their own view the only valid one.

I remember when in seminary we were constantly being lectured to by these "liberals" - I can say this now because the Visitation Report is out.  Time and time again our formators tried to quash orthodoxy and expose us to "progressive ideas" which, funnily enough, always contradicted the teaching of the Church, the will of the Holy Father and at times even the Commandments.  To contradict their opinions, to expose them, was to bring wrath on your head - which many of us did many times.   There was no room for dialogue - to question (even innocently) what they were preaching was to expose yourself as bigot: "You're so closed".  There was one way to do things: their way.  There was one way to "do liturgy" - their way.  There was one way to be a priest: their way.  Veer from this and they would do what they could to get rid of you.  So am I upset that certain "liberal" priests are being investigated?  Not at all.

Another interesting opinion for you, from a friend of mine.  Looking at the moves which the government seems to be taking to legislate for abortion here, he wondered if there was an economic reason for this.  His argument goes like this:  Ireland is the best place to have a baby - the safest.  Pregnant women are well cared for (absolutely true - our health professionals are fantastic, God bless them).  If a woman has a difficult pregnancy, everything is done for her and the baby; hospitals will even keep a pregnant woman at risk of serious complications in care for the duration of her pregnancy to make sure that she is looked after and any emergencies are dealt with quickly (the pro-aborts don't tell you about that when they are raking up the hard stories).

However, such care costs money - lots of money, money Ireland is struggling to find in these hard times.  Is it possible, my friend has asked, that abortion is being seen as a cheaper option for a difficult pregnancy? That abortion is cheaper than having to provide for babies and children that have serious medical needs?  And so in order to keep the national budget on course, certain cuts have to be made??  Would a government be so cynical, so uncaring? What do you think?   Are the Minister of Health and the Fine Gael/Labour government considering the financial benefits of legalised abortion?
Posted by Father Director at 10:00 AM