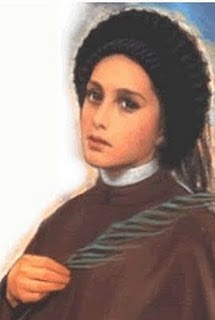 In Discalced Carmel, as we celebrate the feast of the Martyrs of Guadalajara on the 24th July, they share that feast with another martyred Carmelite sister, Blessed Maria Mercedes Prat.  Blessed Mercedes was not a cloistered Discalced Carmelite, but a sister of the Society of St Teresa founded in 1876 by St Henry Osso.  The congregation is affliated to the Discalced Carmelite Order, and so we look upon the sisters of St Teresa as members of our family - their saints are commemorated on our Calendar.

Blessed Mercedes was a most remarkable woman.  She was born in Barcelona on the 6th March 1880 and baptised the following day.  Devout from her childhood, she sought to live her Catholic faith with great intensity.  She made her First Holy Communion when she was ten, and made the resolution to go to Mass every day, if possible, and receive Jesus in the Eucharist.  Formed by her Eucharistic devotion, she offered herself to help others, demonstrating a natural kindness towards her neighbour.  Within a short space of time she was orphaned: her father Juan died on the 16th May 1895, her mother Teresa exactly one year later.  At the age of sixteen, as the eldest child, she had to assume responsibility of looking after her siblings.

She was artistically talented and good with her hands.  Indeed, she would have made many a man very happy if she was interesting in marrying: but she wasn't - her heart belonged to Christ.   She served a catechist, and joined the Arch-confraternity of St Teresa where she became familar with the life and writings of St Teresa of Avila, and the Society of St Teresa, a congregation dedicated to children and education.

Having observed the sisters of the Society, she discerned a vocation to join them.  When her siblings were old enough, she entered the Society in 1904, making her novitiate in the community's house in Tortosa.  She made first profession on the 10th March 1907, and final profession three years later.  She was assigned to teach, which she did with great acumen and charity.

In 1920, Sr Mercedes was appointed to the Mother House of the congregation, in Barcelona, where, for the next sixteen years, she continued her life of prayer, dedication to the Society's mission and works of charity.  She was deeply admired by her sisters, the children in her care and the people who worked with her.  She was firm, but a woman of extraordinary charity, kindness and gentleness.

When the persecution against Catholics broke out in Spain, Barcelona was one of the hotbeds.  Catalonya, as a province seeking independence from Spain, was already a hotbed of political activity, and among those vying for power within the area were the Communists.   Focusing on education, as Communists and revolutionaries do, the congregations involved in education were expelled from their schools, the Society of St Teresa among them.  On the 9th July 1936, Sr Mercedes and the sisters were forced to leave their school and flee.     In hiding for a few weeks, Mercedes was captured by the Republican militia on the 23rd July.  Asked to identify herself, she said that she was a religious and a teacher.  "Do you realise that you can be shot for that?" the member of the militia said to her.  Mercedes turned to a sister who was with her: "They are going to kill us.  But let us go, I must obey because it is the will of God".

The two sisters were arrested and imprisoned.  Throughout the night they were interrogated and threatened: Sr Mercedes remained calm and gentle as ever.  Just before dawn on the 24th July, she was taken by members of the militia from her cell and brought out to a spot on the road to Rabasada.   At dawn she was shot as she prayed.  Taking some moments to die she prayed the Holy Names of Jesus and Mary, and then "Forgive us....as we forgive".  The sister who was with her, and spared her own life, closed Sr Mercedes's eyes and would later give the testimony of the martyrdom.

Blessed Mercedes was beatified on the 29th April 1990.
Posted by Father Director at 8:00 AM