A Virgin Most Powerful!

Having been very busy over the last few days I haven't had time to blog, and so much has happened!  The best was of course the enrolling of Hildegard of Bingen in the canon of Saints by the Holy Father last week. I was delighted!  She was one incredible woman, a polymath, a lady of great culture and indeed so wise the nickname, "The Sybil of the Rhine" is no exaggeration.  She will be the fourth woman Doctor of the Church - I presume the Pope will conduct a ceremony for both herself and St John of Avila.

For many St Hildegard is unknown, and for some of us, she is a woman much misunderstood.  She has been claimed by all and sundry, and so now when we hear of her it tends to be by radical feminists who see her as a rebel against male patriarchy and New Agers who see her as some sort of "white witch" casting her spells and mixing her earth potions in the best ecological way.  If Hildegard was around she would give them a slap, as a friend of mine would say.

She was first and foremost, and she would declare this herself, a faithful daughter of the Church.  She loved Christ, and that is the first thing we need to remember.  She was consecrated from an early age, and most of her long life in an abbey.  She was a wise, prudent and holy Abbess, given much to prayer and the practice of virtue.  She received many visions which helped her understand the teaching of Christ and the call to holiness, and she responded generously to that call.  She wrote mystical texts, profound theological works (hence her being declared a  Doctor), praised her Lord and dignified the liturgy with her musical compositions, and nurtured a deep love for the poor and the sick.   She was also obedient to the Pope, and listening to the advice of wise and holy people: she entrusted herself to the advice and guidance of St Bernard of Clairvaux.

Pope Benedict dedicated to Audience talks to her in 2012: one on the 1st September, and the second the following week: they are well worth reading.   St Hildegard's cult has now been officially confirmed, her feast, the 17th September, has been added to the General Calendar, so we may now publicly celebrate her feast in our parishes and churches, and offer votive Masses and Offices. 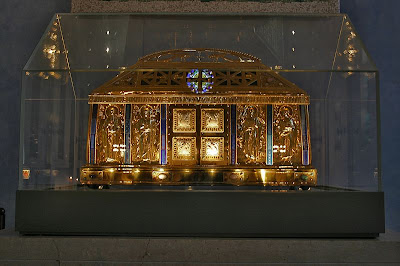 The Relics of St Hildegard

Here's an interesting post from Elizabeth Scalia over at the Anchoress blog.  She starts with a few thoughts on Nanci Pelosi, and then moves to reflecting on the possibility of a schism within the Catholic Church in America and the creation of an American Catholic Church which will be liberal, pro-abortion, married priests, women priests (the usual stuff) and obedient to the secular authorities.

It is a very interesting article, and she has a point.  As readers will know I have mooted that the same may happen in Ireland, though my even suggesting it has raised a few eyebrows ("Never happen, father").  To be honest I think it might - it has happened before, most notably during the Protestant Revolution in the 16th century.  Henry VIII's creation of his Church of England is a perfect example.  Looking around him and listening to what is being said, here in Ireland is a definite anti-Rome movement growing in the Church, a movement, if not sparked, certainly encouraged by our Prime Minister and members of the government.  As I said before, an obedient "state church" would come in very happy.  As for our socialist friends who quote Marx on religion, they know the value of being the ones handing out the opium to the people.

Right, a bit of music - we haven't had some in a while.  In honour of her canonisation, a some of St Hildegard's compositions: