Solemnity Of SS Peter And Paul: A Spiritual Pilgrimage 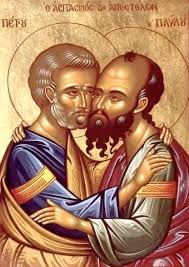 A happy feast day to you all - the Solemnity of the Holy Apostles, SS Peter and Paul.  I love these days at the end of the June, they bring us right of the heart the Church in Rome as we reflect on the first beginnings and the persecution of the first martyrs there, among them SS Peter and Paul.   This is the "Quo Vadis" week really, when we immerse ourselves in the heroism of our brothers and sisters who shed their blood for Christ and sanctified the city we now look to as the See of our Holy Father, the successor of St Peter.

It is a time when we can do a spiritual pilgrimage to those holy places.  Starting at the Mamertine prison, beside the Roman Forum, down in the lower cell, dank and damp, where Peter and Paul were held in chains together awaiting their fate.

Then the journey out the Via Appia (the Appian Way) to the Quo Vadis Church, stopping off at the Circus Maximus where many of the first martyrs died.

The Via Appia Antica The "footprints of Jesus"

After a prayer in the church, and having looked at the "footpints of Jesus", back into Rome with Peter renewed, to visit his tomb in St Peter's Basilica on the Vatican hill where he was crucified upside down and then buried in the cemetery nearby.

The Crucifixion of St Peter Then on out to Tre Fontane, to the site of St Paul's beheading, taking a moment to reflect on the three fountains which may well indeed symbolise the waters of baptism being poured out all over the world on countless converts redeemed by the blood of Christ and won by the intercession of the blood of the Apostles.

The beheading of St Paul 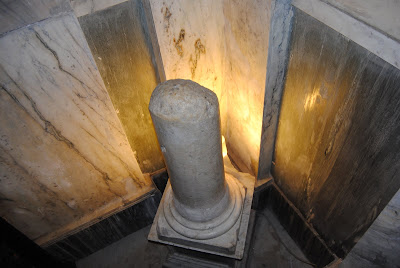 Then the walk into the Basilica of St Paul Outside-the-Walls to spend some time praying at his tomb, and perhaps some moments reading from his epistles.

The Tomb of St Paul

And finally back in to the city to the Basilica of St John Lateran, the Pope's cathedral, to pray for the Holy Father, and to venerate the heads of the two Apostles which are enshrined above the Papal Altar. In news today: the US Catholic bishops have rejected th﻿e US Supreme Court's judgement on Obamacare.  An interesting analysis of the judgement on Fr Frank Pavone from Phil Lawlor.  And Scripture scholar, Fr Jerome Murphy-O'Connor believes Jesus had a nervous breakdown in the Garden of Gethsemane.

Fr Murphy-O'Connor has many interesting and insightful things to say on the Scriptures, but sometimes he just loses the run of himself, and I think he has done it again with this particular theory.  Another of his strange notions concerns St Paul's marital status.  Even though there is not a shred of evidence to suggest St Paul was married, Murphy-O'Connor maintains that he was but his wife and children probably died in a dreadful accident and so he could not bring himself to even refer to it when he gives his biography and lists his sufferings in his epistles.  It's one thing having a theory, but theories must be backed up with evidence, or at least a tradition however vague, but Murphy O'Connor offers no evidence, just fanciful notions.

And finally Cardinal Dolan's reflections on the Venerable Fulton Sheen and the Venerable Angeline McCrory following the Holy Father's decrees yesterday.  You know something, the Saints keep us sane.  In the midst of the craziness of the world we can look to them and see that at every point in history there were people who "got it", who convince us that we are walking the right path to Christ and urge us to keep walking, and to get up when we fall.
Posted by Father Director at 8:00 AM