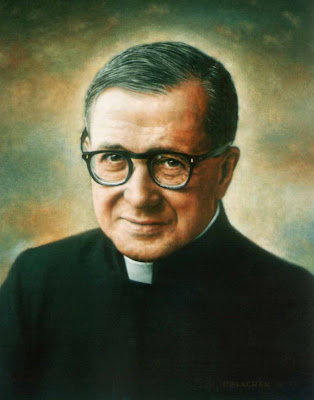 Today is the feast of St Josemaria Escriva, the founder of Opus Dei, so happy feast day to all the members of the Prelature and devotees of the Saint.

One of the great benefits of the Internet is that you can see many of our holy people in the flesh so to speak, and this is true of St Josemaria.  There are a number of YouTube videos of him giving talks and engaging with people.  Contrary to the "black legend" which has been constructed around him, St Josemaria can be seen to be a humble, holy, funny, intelligent and engaging person.  I am posting one of the videos at the end of this post, so if you have time watch it. I love the joke about the Andalusian gypsies.

Opus Dei have had a lot of bad press over the years.  About twenty years ago RTE did a hatchet job on the association and that has poisoned Opus Dei in the eyes of many Irish people ever since. I had an interesting conversation with a parishioner a few weeks ago and Josemaria came up in the conversation - the reaction was not good.

Here is another situation where, thanks to the media, the truth about the Church and a Church organisation has been distorted so as to turn people against it.  I  think, looking back at what happened, I see the media in Ireland sharpening its teeth on Opus Dei so as to begin its assault on the Church.  The success it had in demonising the organisation gave it confidence to go for the "mother ship".  In a sense Opus Dei has become the modern Jesuits.  In history whenever a government or monarch was going to persecute the Church, they threw out the Jesuits or killed them - whichever was quicker.  It seems the modern secularist demonises Opus Dei and then starts on the Church.  I suppose that is a compliment to the Prelature - a sign that they may well be a leaven and a powerful witness to the Church.

St Josemaria was indeed a dangerous man - hence many feel the need to demonise him.  He had a very dangerous message - a revolutionary message: one he found as he spent hidden hours reading a dangerous book.  His organisation continues to spread this dangerous idea, and his sons and daughters dedicate their lives to it, are totally committed to it, put everything else in the service of it.  That idea is.....that all people are called to be holy, and that that holiness can be achieved, not just in a convent or monastery, or as a priest or hermit, but in the ordinary events of ordinary lives and through the ordinary work of one's day.

To a world immersed in mediocrity and pleasure, that idea is very dangerous.  It is dangerous because it blows out of the water once and for all the accusation that the standards set by Christ and upheld by his Church are unreachable.  They are reachable, so none of us have the excuse of lying back on our laurels and saying "It is impossible, just stay as you are, sure God loves you anyway".  St Josemaria tells us that we have to jump out of bed in the morning, on to our knees and to spend that day in humble service of God and our neighbour, open to the work of the Holy Spirit who seeks to sanctify us and prepare us for heaven.  The dangerous book, by the way was the Bible - in its original integrity and not reinterpreted for our comfortable times.

One of the accusations made against Opus Dei was that they are secretive. I have two responses to that: the first is indignation.  These accusations are coming from people and organisations which can be deeply secretive themselves.  Is there any other organisation more secretive than the media?  When you start looking at what goes on behind closed doors in secular newspapers and media networks you get an eye opener - as we saw in the case of Fr Kevin Reynolds.  And as for infiltration - the connections between media and government and various other influential organisations here in Ireland are astounding.  There is small, tight circle in Ireland and you are either in or out, and if you are in, then you're "in".   There are also other interesting connections and relationships which are kept fairly quiet: one concerns certain political people and the former Soviet Union.  And as for the Freemasons, well we don't hear much about them in modern Ireland: is this for a reason?  Has anyone noticed that their HQ is beside our parliament building?

My second response concerns the reality of the "secretiveness" of Opus Dei: they are ordinary people living and working in the world, living out their spirituality and striving for holiness in a hidden way ("hidden with Christ in God" as St Paul describes it).  They do not trumpet their good works for all to see - they just want to be left alone to love God and serve their neighbour.  They do not proclaim that they are members for a number of reasons, one I'm sure is because they have been demonised so much by the media it's best not to draw attention to themselves.  After all, any group that has been unjustly demonised tends to be careful.  If the media turned on stamp collectors as they did on Opus Dei, I think many of them would go underground.

That said, people have had negative experiences, and that happens even in the best organisations and with the holiest people.  No one and no organisation is perfect - we strive for perfection, but that doesn't mean we have it yet.  It is also true that every organisation has people who take things to extremes, can be tough, too zealous, and yes, can be uncharitable and unChristian: welcome to the sinners's club (aka the Catholic Church).  An important part of the spiritual life is enduring difficult and demanding people: they are called "saint-makers" and Opus Dei has its share of them too!

St Josemaria took Christ's message to heart: "Be holy as your heavenly Father is holy", and he took Jesus at his word when, in his Priestly Prayer in St John's Gospel, he prayed that we would achieve that holiness.  Christ will help us, and so in him we truly become children of our Eternal Father: saints.  St Josemaria was called to proclaim that message long before Vatican II would reiterate it in its teaching.  We don't have to be members of Opus Dei to live that message - it is presumed by the Church that we are striving to do so since the way of holiness is, as our Gospel tells us today, the narrow path to heaven.

St Josemaria was sent to wake us up to this.  He often saw himself only as a little donkey, but I think he is more like an alarm clock which goes off on a fine and sunny morning, urging us out of bed to embrace the heroic minute - the heroic life.  To those who see the joy of a new day, he is a welcome witness; to those who want to turn over in the bed, pull the covers over their heads and pretend the world does not exist because they are too tired to be bothered with it, then he is an nuisance.  Thank God for that Nuisance!