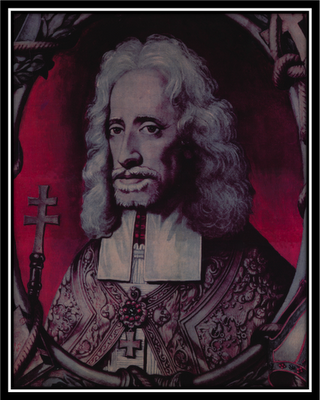 A new celebration for our diocese today - new, not in the person commemorated, but in the status of the commemoration.

In Ireland the 1st July is the memoria of St Oliver Plunkett, Archbishop and Martyr (1629-1681).  Given that today is a Sunday the memoria would normally be passed over.  In our diocese Meath, and in the Archdiocese of Armagh, the commemoration is usually that of a feast: Oliver was a Meath priest who became Archbishop of Armagh.

Well today, for the first time, these two dioceses celebrate a Solemnity in honour of St Oliver, the Sunday gives way to the feast.  This is unusual, though the norms provide for it.  So it was red vestments, homilies on St Oliver and veneration of his relics in both dioceses.  St Oliver's head is preserved in Drogheda, just a few miles away: there is a Mass and procession there later in the afternoon.

Oliver was a remarkable man.  Born in Loughcrew, Oldcastle, Co. Meath, in 1629, during the persecution; he left Ireland in 1647 for Rome where he studied for the priesthood and was ordained in 1654.   He was appointed a professor of theology at the College of Propaganda Fide where he served until 1669 when he was appointed Archbishop of Armagh.  Due to spies in Rome, it was thought best not to consecrate him in the city, and so as he was on his way back to Ireland, he was consecrated bishop in Ghent on the 30th November 1669.

Archbishop Oliver arrived back in Ireland  on the 7th March 1670, and he began nine years of intense labour, trying to run and reform the Church in Ireland which, when it was not being persecuted, was lax.  He faced many difficulties, considerable opposition - particularly from other Irish bishops and priests, and endured many hardships.   "Implicated" in 1678 in the fictitious "Popish plot" invented by Titus Oates, Oliver went on the run, but refused to leave his flock.  He was betrayed by a priest and eventually arrested in 1679.  Aware that he would get a fair trial in Ireland, the English authorities had him transported to London to stand before a jury that would convict him regardless of the evidence.

Following a travesty of a trial noted for many perjuries, Oliver was condemned to death in June 1681.  On the 1st July he was brought to Tyburn where he was hanged, drawn and quartered.  He would be the last Catholic to be martyred at Tyburn.

His body was buried first in St Giles Churchyard, London, and then secretly taken to Lamspringe in Germany into the care of the Benedictine Order - St Oliver had become a Benedictine Oblate while in prison.  His head was taken by friends who had witnessed his martyrdom - it finally came into the care of the Dominican Order.  When the Benedictines returned to England, they took St Oliver's body with them and it is now preserved in Downside Abbey in Somerset.  The head was obtained from the Dominicans in 1921 and enshrined in a diocesan church in Drogheda.  A large bone relic was given to his native parish in Oldcastle.

St Oliver was beatified in 1920 and canonised in 1975.  He is the only Irish person to be canonised since the Council of Trent. 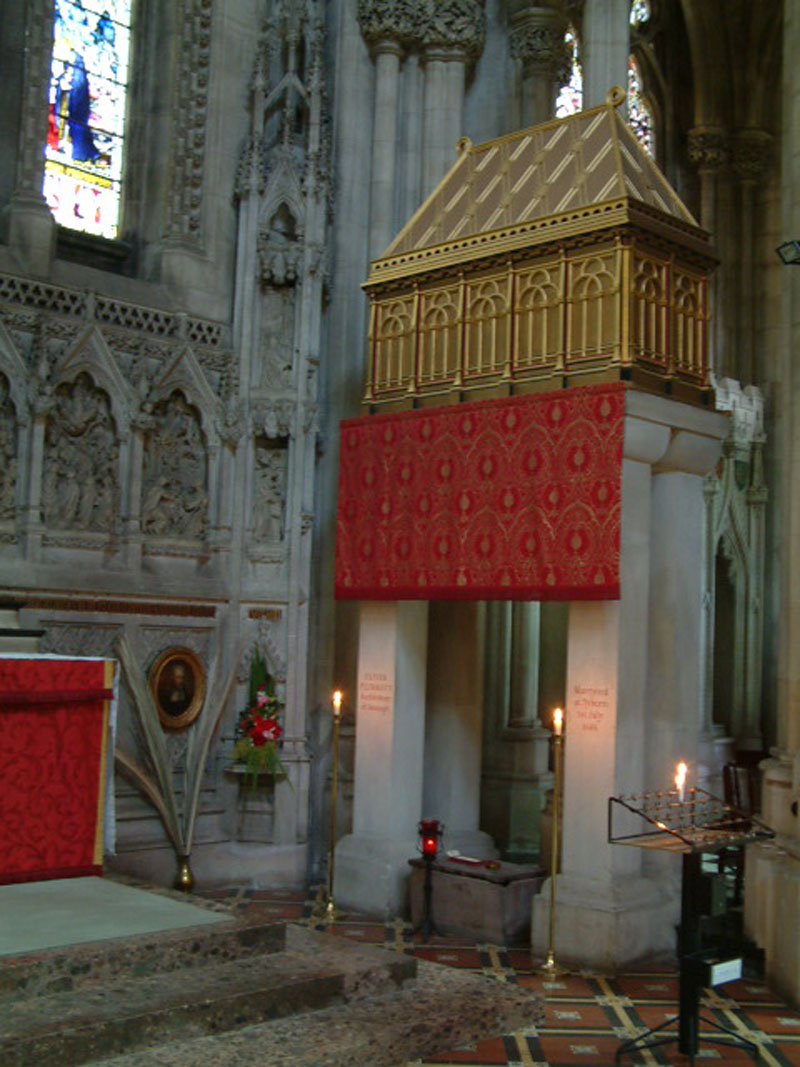 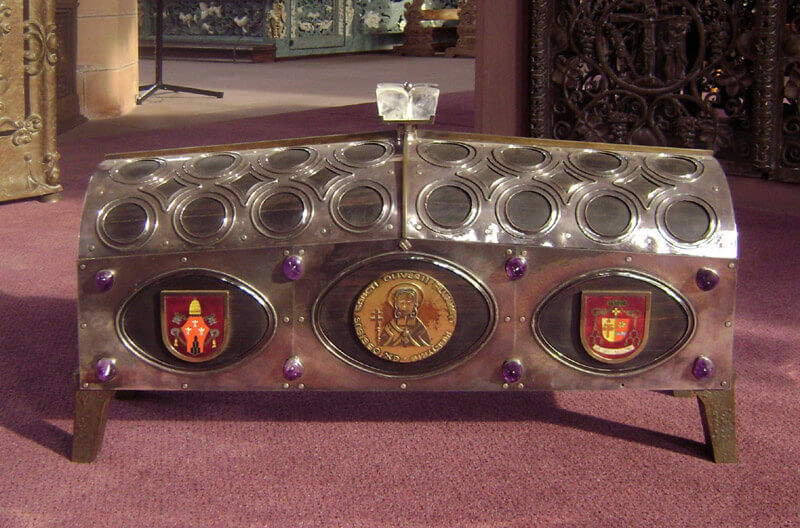 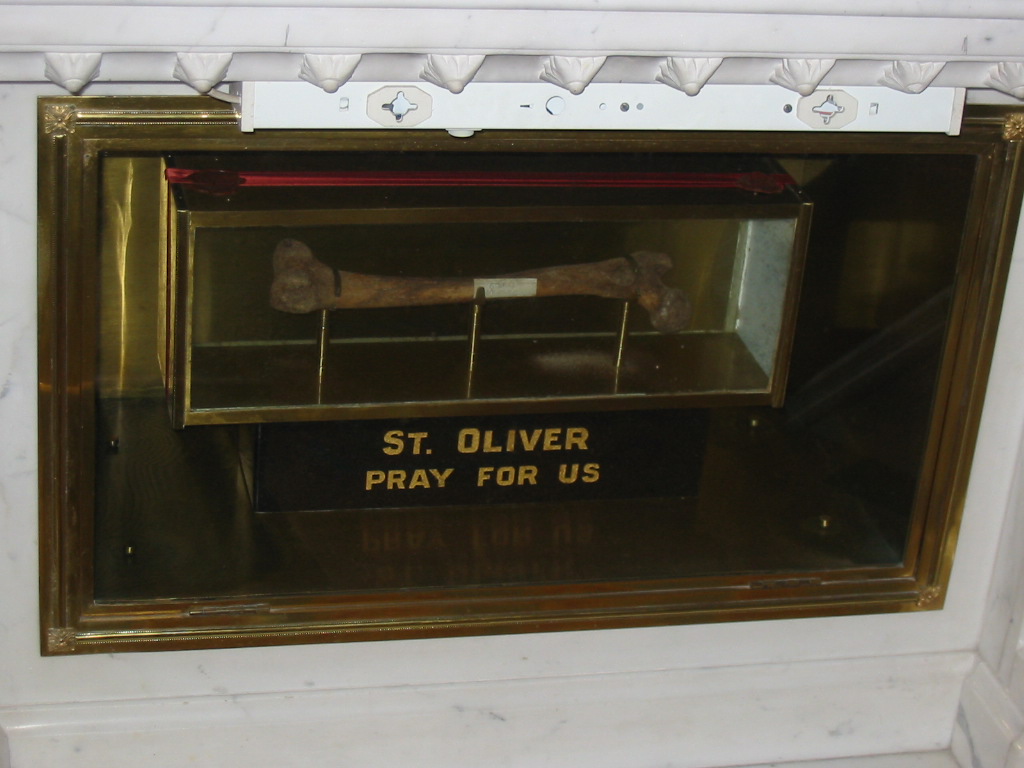 In news: things are hotting up in Liechtenstein as the abortion issue seems to be deciding the principality's fate.﻿  The citizens are considering stripping the Prince of his powers of veto in order to bring abortion into the country.  The Hereditary Prince Alois is threatening to leave the country if they do so - he is willing to lose his throne rather than approve the killing of the unborn.

If the Princely family leaves, then the tiny state is in serious trouble: the economy depends on the monarch who owns the biggest bank, and the citizens's prosperity may well be a thing of the past.  Well, if they want abortion then they deserve whatever comes to them.

Given that the Prince is a man of principle and authentic Christian faith, a country looking for a monarch could do worse than invite the House of Liechtenstein in.  I wonder, would this dear, jaded republic consider a swap?  We'll take the Prince and Liechtenstein can have Enda.

UPDATE:
Just in: the citizens of Liechtenstein have voted to allow the Prince keep his veto.

Results just out show that 76.1% rejected the proposal to strip him of the veto in order to bring abortion into the principality.

Is this a vote for life?  Possibly not, but rather a pragmatic one - if the Princely family left, the country would go back to being a tiny backwater rather than a major economic centre.  But, at least the Prince has a chance to try and turn the hearts of his people back to respect for the unborn.
Posted by Father Director at 8:00 AM