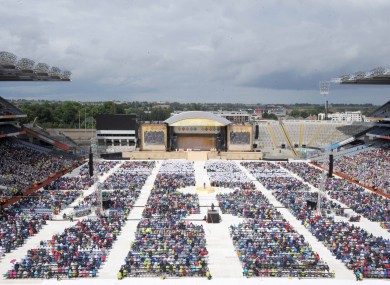 Well, the 50th International Eucharistic Congress is over and the Church is preparing for the next one in Cebu in the Philippines.   We had a large contingent from the Philippines over and, as always, their faith was most impressive.

I spent the week going up and down to the Congress doing some continuity work for the television broadcasts on EWTN, some vox pops and interviews, some of which were for EWTN radio.  One of the most impressive interviews was with Pat Kenny who runs the Fr Willie Doyle blog.  He gave a talk on the Irish Jesuit on Monday evening in St Kevin's Church hall which was packed.  I interviewed him on Tuesday afternoon and I think it will be a very interesting programme.  Fr Willie is one of the Irish figures who should be put forward for canonisation - if he were Italian, Polish, French or Spanish, he would probably be canonised by now.

Anyway, the Congress.  I must say I was very impressed by the organisation and it was obvious that a lot of hard work went into it, so congratulations to those who pushed the sleeves up and tackled what was a mammoth task.  The RDS had a real festival atmosphere and I was delighted to see that many of the new congregations and communities had come and their presence would have encouraged the Irish, many of whom are unaware that religious life is more vibrant in the Church today than it ever was.   Despite what the secularist media say, the Church is alive and kicking!

The liturgies were, for the most part, done very well, although there are a number of issues - some abuses crept in, but then given that these abuses have become part and parcel of the Irish liturgical scene they were to be expected.  But Rome was watching (and the Holy Father referred to abuses in his message yesterday), so I presume over time a gentle but firm hand will deal with them.  But there was a prayerful atmosphere as well as a jubilant one: the Congress gave Irish Catholics an opportunity to celebrate their faith and be exposed to the universal nature of the Church and the many ministries, associations and congregations which are part of our faith.  So well done to the organisers for facilitating that and facilitating it so well.

There were many wonderful speakers, and a number who should not have been asked, and that had been one of my concerns earlier.  That said I was delighted to have the opportunity to see and hear some world class speakers, including the new bishop of Shewsbury, Bishop Mark Davies who is a most remarkable man: a holy man, a good bishop and one with an evangelical soul.

While I thought the ecumenical dimension was a good idea, I think they have should have been more careful.  Ruth Patterson, a Presbyterian minister, was one of those involved, and after having a podium to speak at the Congress she came on to RTE radio and basically said that the Catholic Church will have no credibility or effectiveness until it ordains married men and women.  She also said that orthodoxy was a subtle form of idolatry.  She is entitled to her opinion, but I would imagine having been given a platform to speak at a major Catholic event, she would have the graciousness not to attack the Church as she did.  Inviting her was a  mistake, though the organisers cannot be held responsible for what this lady says after the event.  However given her reputation, prudence would have suggested they should not have taken the chance.

I also think the Eucharistic Procession was really lovely, though I believe we should have had it in O'Connell street.  There seems to be a fear of having such processions in the city now, I presume some do not want to appear triumphalist given recent history, but I think we need to start regaining confidence in our faith again. Let's face it if the gays and lesbians can parade down O'Connell street proudly in their hundreds in their upcoming Gay Pride March, we have every right to do so in our tens of thousands.  Interestingly this Congress may have brought confidence back to the Catholics of Ireland.

The Statio Orbis yesterday was very well prepared for.  Contrary to the reports in The Irish Times which says only 50,000 turned up, the figure was much more obviously about 70,000-75,000.  Strange that, Patsy McGarry, the religious affairs correspondent was sitting a few seats away from me and saw the same crowd as I did: perhaps he needs to go to Specsavers and have his eyes checked - obviously his glasses are not up to scratch.   In fact Patsy was pretty obsessed with figures all week: at the press conferences the one question he always asked concerned attendance figures.  Indeed the secular media have been quite boorish in its coverage, and all the work of Fr Kevin Doran and his committee overshadowed by their obsession with apologies.

I was disappointed to see Joe Duffy of Liveline involved in the presentation of the Statio Orbis - given his attitude to the Church and his bashing of priests and Church doctrine on his radio show he should not have been invited.  Nor, in my opinion, should have an invitation been extended to Enda Kenny (unless, of course, he gatecrashed).  I noticed though when he arrived there was booing and very little clapping - it was very subdued. I'll say one thing for him though, he has nerve.  That said, the Statio Orbis was a wonderful celebration of faith, the highlight being the Holy Father's message.

So all in all, congratulations to the organisers for facilitating what became a great festival of faith.  It would be great to have such gatherings and festivals more often: perhaps the Church in Ireland may consider a national Congress every few years.  I know we have the Divine Mercy Conference each year, but I think the faithful Catholics of Ireland would like other events to help nourish their faith. Perhaps some national gathering for the Year of Faith???  So Fr Kevin Doran deserves a lie-in this morning and a few weeks holiday.

Lest some critics take a shot at me in the combox, I do admit that the Congress was not perfect, but all in all it was a success: it made us Catholics feel proud of our faith and reminded us of what is important. It may not sort out the Church in Ireland, but it gives us a boost to start working on reform realising that there are a lot of good, solid, orthodox and prayerful people and organisations out there quietly working away to proclaim the Gospel.  It also brought Cardinal Ouellet to our shores, the one who will be responsible for appointing our new bishops (indeed the majority of them as many of the present bishops are due to retire in the next few years): he needed to see the Church in Ireland, virtues, vices and flaws, to help him in his decision making, and I think he got a good start on that.

Now I'm exhausted, and no doubt many others, so we might all just take a few weeks to recover and get going again for October: the Year of Faith.  Any suggestions anyone?  Anyway, given our positive experience, I think we'll have to start saving: next stop - Cebu in the Philippines 2016.  I wonder if Ryanair will put on a few flights?
Posted by Father Director at 8:00 AM