A Host Of Witnesses

Many religious Orders and Congregations in Spain number many martyrs.  One of the Orders which suffered the most was the Augustinian.    Ninety-nine friars, one of them a bishop, were martyred for the faith. 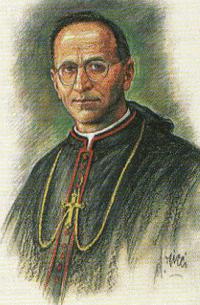 The bishop was Blessed Anselm Polanco.  He was born in Buenavista de Valdavia, near Palencia on the 16th April 1881.   While still a teenager he joined the Augustinians, making his first profession in 1897.  He was ordained priest in 1904.  Recognising his abilities, his superiors appointed him as a teacher and formator for the friars.  He excelled in the post.  In 1922 he was appointed Prior of the community in Valladolid, and in 1932 appointed Provincial of a province in the Philippines.  This post required a lot of travel, yet in the midst of it all he maintained a simple and prayerful life.  It was while he was provincial that he was appointed the Bishop of Teruel in Spain in 1935, and so he moved back to take up his position.

His time as bishop was destined to be short: the Civil War broke out the following year and Teruel, despite being a small city, was a centre of violence and persecution.  Bishop Anselm made up his mind not to flee, but to stay with his people and try to protect them as the anti-Catholic fury threatened to destroy them.   He managed to do so for a about a year and a half, but he knew that he was living on borrowed time.  On the 8th January 1938 the hour arrived for him. With some of his priests he was arrested by the militia – he left his residence dressed in his Augustinian habit.

Interrogated, the militia tried to force the bishop renounce a letter the bishops of Spain had written denouncing the religious persecution by the Republicans: he refused.  He was imprisoned with his Vicar General and as the war progressed it seemed that they might survive.  However their captors realising that they would soon have to flee themselves, took the bishop out on the 7th February 1939 and shot him at Pont de Molins near Gerona, not far from the border with France.  His Vicar General was martyred with him.  His remains were recovered and laid to rest in his cathedral.  He was beatified on the 1st October 1995.

Blessed Anselm leads a host of Augustinian martyrs – men and women.  Of these the largest group of martyrs come from the community of the Escorial, the royal monastery outside Madrid.  The Escorial was founded both as royal palace with a monastery by King Philip II of Spain.  Dedicated to St Laurence, the deacon and martyr who was born in Spain, the complex was designed to resemble the ancient Temple of Solomon.  The Augustinians took up residence in the monastery section and they ministered in the palace/monastery chapel, the Basilica of St Laurence.

In 1936 the community number 111 friars, some of whom lived outside the monastery in a community in Madrid to facilitate a ministry to university students.    The prior was Fr Angel Custodia Vega (who survived), and it fell to him to protect the community when the Civil War broke out.  Living in such an important symbol of Catholic Spain, the community were quickly garrisoned in July 1936 and lived as virtual prisoners until the 5th August when, as they were praying the chapel, local officials arrived to tell them that they would all be transported to Madrid the following morning.

Fr Angel suspected what was coming, so he ordered a great feast for the community meal that evening.  The former prior, Fr Juan Monedero spoke during the meal and told the community to be prepared for whatever was to come – things were bad, he said.  The next morning, the community rose early, all the members went to confession and celebrated the Conventual Mass.  Four buses arrived and the friars were taken to a school in Madrid which had been converted into a prison.  The extern friars joined them later, having been arrested in their community house.  Among these was the Provincial himself, Fr Avelino Rodriguez, and the Assistant Superior General of the Order, Fr Mariano Revilla.

The community tried to maintain a semblance of their religious life, though they were subject to dreadful abuse and blasphemies.  They were offered freedom in exchange for abandoning their faith: not one of them succumbed.

On the 28th and 30th November, the friars were put on trial and found guilty of the crime of being Catholics and friars.  They condemned to death, and the sentence was carried out on Blessed Avelino and Mariano and sixty-five of the El Escorial community.  Among them was a Cuban friar, Blessed Jose Lopez Piteira who was only twenty-three: he was the first native Cuban to be beatified.