The Immaculate And Her Faithful Servant 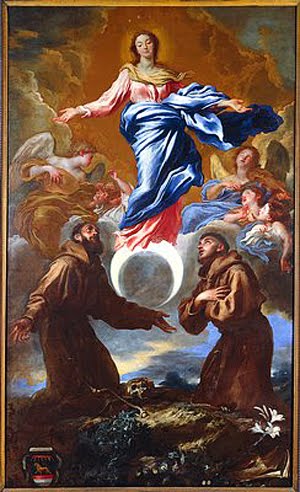 A happy feast day to you all.  Today is a wonderful celebration, the Solemnity of the Immaculate Conception of Our Lady.   It is one of two unique feasts within the Christian faith where we celebrate conception and the destiny of the child conceived: two pro-life feasts which remind us of the personhood of the child in the womb.

On the 25th March we celebrate the Annunciation which is the feast of the Incarnation - when "the Word was made flesh".  Our God became man and it happened at the moment of conception.  On this great solemnity we marvel at the awesome privilege God gave to Mary which she was preserved from Original Sin and personal sin from the first moment of her life - i.e. when she was conceived.

In these times we turn to the Holy Virgin and ask her prayers for all our children, especially those who are most vulnerable, and among them the little ones in the womb.

As we celebrate today, let us also honour Blessed John Duns Scotus (pictured above with Our Lady and St Francis).    Blessed John was one of the great defenders of the Immaculate Conception and preached the dogma throughout his life even when great theologians like St Thomas Aquinas and St Bernard of Clairvaux disagreed with him.

Blessed John was a Scotsman, born in Duns, Berwickshire, Scotland, around the year 1266.  He entered the Franciscans and was ordained on the 17th March 1291.  He was educated in Oxford and was renowned for his ability and learning.  He taught at the University of Paris, but was expelled in 1302 for siding with the Pope in a feud the King of France was conducting with the Church.  However he returned to the university in 1304 and taught until he was transferred to Cologne in October 1307, where he died on the 8th November 1308.

Blessed John was an important philosopher and theologian who has lived under the shadow of St Thomas Aquinas.  Many of his works were unfinished at the time of his death, yet he was influential enough to found a school of thought - Scotism.  He was an arch-rival to William of Ockham, not a bad thing since Ockham gave us Nominalism which would eventually lead to modern relativism: Scotism actually allied itself with Thomism in combatting Nominalism.  Blessed John was known for his subtlety in thought and earned the title "Doctor Subtilis".  Much neglected, his work has been praised by Blessed Pope John XXIII who recommended that theology students should study him.

Pope Benedict wrote a beautiful Apostolic Letter to celebrate the seventh centenary of the Blessed's death in 2008.    It begins with a most joyful greeting: "Rejoice, City of Cologne, which once welcomed within your walls John Duns Scotus, a most learned and devout man, who passed from this life to the heavenly Homeland...and whose remains you preserve with admiration and veneration".

I am sure Blessed John can glory in many titles, but I think the one he would covet and cherish above all the rest is "faithful servant of the Immaculate", and it is one he richly deserves.  This solemnity today is a triumph for him, as it is for all of us, for in this privilege given to Our Lady we see, as did Blessed John, a sign of hope for all humanity: what she was at her conception, was throughout her life and is now in the heavenly kingdom, we hope to be one day: free from all sin.

O Mary conceived without sin, pray for us who have recourse to thee.
Blessed John Duns Scotus, pray for us.

The tomb of Blessed John Duns Scotus in Cologne.
Posted by Father Director at 8:00 AM