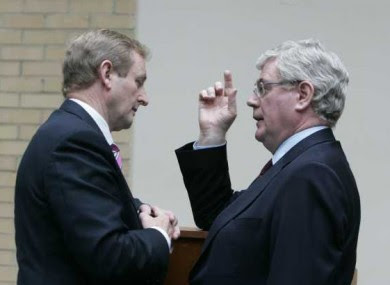 At the end of our St Genesius Film Club in Dublin yesterday evening, a number of people were discussing the government's decision to legislate for abortion and the Archbishops's response, one young man, a teenager commented: "Well, what do you expect?  It's the red tail wagging the blue dog."  An interesting comment and one which reflects the opinion of many that Labour has whipped Fine Gael into supporting its own anti-life agenda.  I do not know if it is true, but it may well be academic since history will record, and we will never forget, that Enda Kenny and Fine Gael as the majority party in government, brought abortion into Ireland.

I see Labour Minister Pat Rabbitte is shocked at the Church's response and is castigating the bishops in his own inimitable way.   He wonders how the bishops can jump to conclusions when the legislation has not even been written, well the dogs in the streets, red, blue or green, know what Labour are trying to do.  The bishops have stood up and are being counted and are showing that in the struggle to come they will not be silenced now. Perhaps Minister Rabbitte is shocked to discover that the Church has teeth after all.  And it seems Minister Rabbitte does not like the term "culture of death", well it may grate on his ears, but that's what he and his colleagues in government are seeking to create.

Of course bishops, faithful and pro-life organisations must work together, as I have said.  No doubt the media will be up to its usual tricks and will try and support red tail/blue dog in getting the legislation through,  That may well mean the "exposing" of another scandal involving the Church at a crucial moment, but I think we need to take a piece of advice from an exorcist when engaged in an exorcism - when the strange things start happening, ignore them, they are distractions designed to unsettle and interrupt.  It will be necessary, then, to be prepared and to have a plan of action ready.  While I hesitate to use the terms of war since they imply violence, which we must reject at all costs, we are engaged in a war - the battle for life.

One of the issues the Archbishops's statement raised was that of the free vote - as I mentioned, the parties are going to impose the whip and so TDs will not be free to vote according to conscience but must do as they are told.  First of all I note the hypocrisy as Minister Rabbitte's insists that he did not want to see bishops dictating to legislators while he sees no problem in party leaders dictating to the consciences of TDs.  Whether he believes it or not, TDs will have to answer to God for the way they vote and their eternal salvation may well now depend on how they respond to this legislation.  If a party leader wants to send himself to hell, does he have the right to insist that his minions must do the same?

But I also thought of the Nuremberg trials, where Nazis tried to defend their actions by insisting that they were only following orders.  The judges at the trial correctly rejected that defence pointing out that each of us is responsible for our actions, and when it came to their part in the murder of millions of innocent people in the death camps they could not evade justice.   That insistence by the judges on personal responsibility has been accepted by most, yet now here in Ireland personal responsibility has no place, all that matters is that TDs do as directed by the leader.

And finally, another issue that now also arises is that of excommunication.  The Church in Ireland will have to brush up on its canon law to see how to deal with Catholics in parliament who vote for the legislation.  Are they to be excommunicated, or just deprived of the Eucharist?  And will the pastors of the Church have the courage to follow through?  Lest people think that this is the Church imposing the party whip - it is more nuanced than that.  The Church teaches that direct abortion is evil and never justified: a Catholic who wishes to remain in full communion with the Church cannot support abortion.  In the Church's eyes TDs will be free to act as they see fit, however if they vote for abortion legislation they themselves have broken communion with the universal Church:  the decree of excommunication merely confirms what the TDs have done themselves.

I also note the timing of all this: Advent and Christmas - the feast of the Incarnation, of the birth of the child who was God.   It is grotesque and a real sign that evil is at work.

In a related argument, Fr Alexander Lucie Smith reflects on how choice has become a god in the eyes of so many today.
Posted by Father Director at 1:55 PM