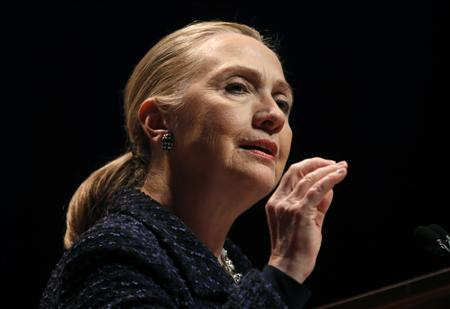 I remember the first time I saw Hillary Clinton in the flesh: she and her husband Bill, by then a former president, were at a ceremony in St Patrick’s Cathedral, New York where President George W Bush presented the Congressional Gold Medal, posthumously, to Cardinal John O’Connor.  I had been invited by a priest friend in the Archdiocese.  During one of the eulogies, one of the senators for New York praised the late Cardinal’s work against abortion – the vast crowd stood and applauded: the only two left sitting with bowed heads were Hillary and Bill Clinton – and all cameras were on them.  I had to feel a little sorry for them - they were surrounded.

Hillary and Bill are two of the US's most aggressive advocates for abortion.  Yesterday Hillary visited Dublin to attend the OSCE meeting in the RDS.  Unfortunately, rather than remain aloof as the US Secretary of State should, she could not help but offer an intervention in the current debate on the issue of abortion.  Speaking on human rights, she said that women’s lives matter and promoting women’s rights begins with saving women’s lives - not so subtle hint there.   Hillary, like her allies in the pro-abortion movement, promotes the lie that abortion is necessary to save women’s lives.

Now if the pro-abortion cohort are really interested in women's lives, they might actually look at the gendercide which is occurring in the world thanks to the abortion culture.  Here is The Economist's famous article on the massacre of baby girls, of which abortion is an important element.  China has been waging such a war for decades and now there is a real demographic crisis about to break out.  And of course Savita Halappanavar's own country, India, has a real problem with gendercide.  Gendercide is the wicked offspring of the culture of death, and the abortion movement is its nursemaid.

I remember another encounter Hillary had with another pro-life Catholic – Blessed Teresa of Calcutta.  During that meeting between the two – I think it was over a meal, Hillary was wondering when the US would have its first woman president.  Blessed Teresa responded quite bluntly, “Maybe you have aborted her”.  I believe Hillary was shocked and embarrassed.   Unfortunately it seems she did not get the point, not even when made by a living Saint who knew the value of life, how precious it was, even when that life was ebbing away on the rubbish strewn streets of an Indian slum.

Abortion claims human lives, and as each person is conceived, they come into being with great potential and, as we Christians believe, with a destiny.  Central to that destiny is the mission God has entrusted to that person. In respecting and protecting human life in the womb, we are protecting the future of humanity and the contribution that child will make to humanity.  Perhaps the first woman president of the US has been aborted, and perhaps too the scientists who would develop definitive cures for cancer or HIV/AIDS; great musicians and artists, great teachers and inventors, great humanitarians and yes, perhaps even people destined to be canonised Saints.  Our pro-abortion friends will tell us we will never know and so it will not matter.  But look around and see the world struggling in so many areas of life and then realise that in killing our young we are impoverished by their absence.   As Blessed John Paul II said: “A nation that kills its children is a nation without hope” – I would add to that: a people that kill their children are a people without a future.