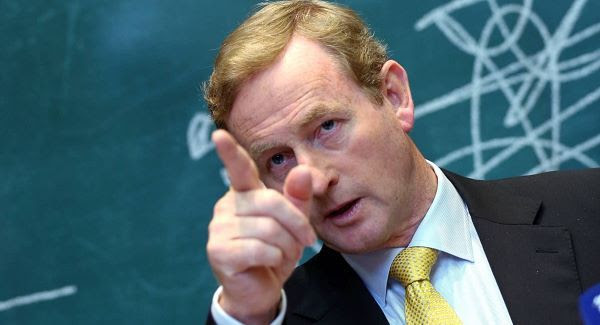 Well, the pro-abortion media were not long in replying to the Catholic Archbishops' response to the government’s plans to legislate for abortion.  In the Irish Independent today, a missile is thrown across the abyss to the Church and the one throwing the weapon is the Taoiseach himself who claims he was threatened over the Cloyne Report.  Is the story true?  To be honest I do not know, but given the Taoiseach’s propensity to skitter around the truth I am afraid I am not inclined to believe him.  I notice he will not give details of the threat – just as he would not give evidence for the accusations he made against the Vatican last year.  So perhaps that is an indication to the veracity of his claims.  Besides he now needs to attack and undermine the Church as she prepares to fight for the lives of the unborn, so that too may effect his credibility.

According to the Taoiseach the introduction of abortion into Ireland will not create a culture of death, but rather a culture of life.  I think Blessed John Paul II is probably spinning in his tomb.   Of course this is not the first time that the Taoiseach has misquoted or failed to understand Papal teaching.  In his attack on Pope Benedict last year he tried to be smart and quoted some of Benedict’s writing thinking it could be used against the Pontiff – he took the quote out of context and revealed his incompetence.

And he's revealing his incompetence again on his understanding of the culture of life, and indeed in thinking that he is only legislating for limited abortion.  In every country where “limited abortion” was legalised, a more liberal abortion regime, even abortion on demand, resulted.  As Dr Ruth Cullen of the Pro-Life Campaign said a few days ago: “Once it is conceded that some human lives may be directly targeted there is no going back. Inevitably over time the grounds for abortion would be widened.”  The Taoiseach does not seem to get this, or perhaps he does but just won’t admit it.

Reading this article I am inclined to think that perhaps “the red tail wagging the blue dog” may not be entirely true - unless he's skipping over Labour’s threats.   However it is obvious from what he says that Enda Kenny is pro-abortion, and it is also obvious that he intends to force his position on his party, particularly those members of Fine Gael who are pro-life.  He will enforce the party whip and says that the members of the party have a constitutional duty to support his position.  That is a most interesting comment: do the TDs we elect have a constitutional duty to support their leader and his views, or to represent the people of Ireland in parliament?

It is also obvious that there is no room for conscientious objection; or at least if someone’s conscience disagrees with party policy they are not permitted to object.  This is not constitutional duty, it is tyranny, and Irish governments have shown that they are inclined to such tyranny when it suits them.  The recent imposition of the Civil Partnership Bill without a vote in parliament and its draconian punishments for registrars and wedding services providers who object on grounds of conscience is one such example: a Fianna Fail/Green Party government was responsible for that.   This is ironic given that our Constitution was written in an era of tyrants – when Hitler, Mussolini, Franco and Stalin were enforcing their will on their political minions, and it was designed so as to prevent the rise of such a dictator in Ireland.  Somehow our politicians have managed to get around that.

To suggest that the introduction of abortion into Ireland promotes a culture of life is nonsense.  When we can say that a life is unworthy of life, regardless of the situations, then we have decided to use death as an instrument of social policy to further a particular agenda – that agenda is part of the culture of death.  A culture of life will respect the lives of both mother and child and will do everything in a crisis situation to preserve life – the lives of both mother and child.  A culture of life loves both mother and child and does not concede that the child has to be intentionally killed in order to save the mother.  A child may die in the attempt to save both lives, that is a tragic outcome, one which is being used cynically by the pro-abortion lobby to further its agenda.  The death of the child in those circumstances was not intentional, and that is difference. Enda Kenny in his legislation, and pro-abortion advocates, want to kill the child - it is their intention that the baby dies; not naturally, but by a direct act be it poisoning, dismemberment or other grotesque means.  There are many names for this, but in no way can this be considered part of a culture of life.

In this struggle, we must all remember that abortion is not a Catholic issue: it is a human issue: it is a flesh and blood issue, literally.  It is not just Catholic babies who die - human beings from all races and countries die in abortion.   The media want to make this struggle one between the government and the Church: it is not - the Church should be just one organisation in that struggle.  Ultimately it is a struggle between the government and the citizens of this Republic.  I think the only way to resolve this issue to allow the citizens have their say, and it is the constitutional duty of the Taoiseach and his government to consult us by means of referendum - a clear and concise referendum.

Bishop John Buckley of Cork and Ross has issued a response to the government's decision, reiterating Church teaching and respect for human life, as he taught clearly in his recent pastoral letter.

The Church of Ireland Archbishop of Dublin, Dr Michael Jackson, has also issued a statement regarding the government's decision: however he supports the decision to legislate for abortion, which is disappointing.
Posted by Father Director at 8:00 AM