Feast Of The Shrine Of Life 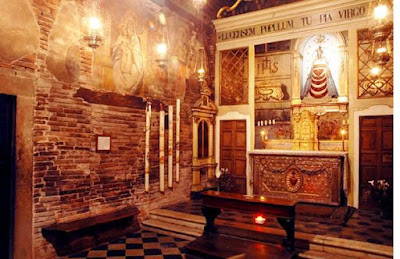 Today is the feast of Our Lady of Loreto.  Loreto, as many of you know, is the Sanctuary of the ancient House of Our Lady, translated in the 13th century from Nazareth.  The manner of the translation has been a subject of debate for centuries.  It was originally thought that angels translated the house over the course of a couple of years, the house resting in various places until it found its final resting place on a road on the "hill of laurels" near Ancona.  Archaeological research then suggested that the house was actually dismantled and brought to Italy, eventually being rebuilt on the hill.

However the enigma continues as archaeological digs around the house have raised more questions: there are no foundations, one corner of the house is hanging over a ditch and one of the walls is on top of a squashed bush.  If the house was built on the road surely the builders would have laid some sort of foundation, and they would not have been able to build it with one corner hanging over a ditch, over thin air, and the squashed bush just boggles the mind.

Anyway, translation aside, the house is the house of Nazareth: the place where Our Lady grew up and where the Annunciation took place.  It is also venerated as the House of the Holy Family, where Jesus grew up.   It is an important shrine, and one with tremendous significance for us as the first "church of the Incarnation" where we are led to deeper reflection on the Son of God's becoming Man for the sake of our redemption.  As the place where "the word was made flesh", it is a truly pro-life shrine where God was conceived as a child in the womb of the Virgin Mary.

News.  Bishop John Buckley of Cork and Ross has issued a pastoral letter on abortion.

In his weekly column in The Irish Catholic, David Quinn has some sobering things to say on the abortion issue.  According to David, Enda Kenny will not keep his pro-life promise, not unless there is a grassroots revolt within the ranks of Fine Gael.  I am inclined to agree with him.  So far the Taoiseach has broken many of his pre-election promises, and I think with the Labour party applying pressure he will fold on this issue too unless he sees his backbenchers on the rampage and the unity of the party is seriously threatened.  Keeping the coalition partners happy is one thing, but the disintegration of the party is another - so too is his leadership.  If a majority of Fine Gael backbenchers revolt Kenny's days may well be numbered, as, perhaps, are those of his Fine Gael ministers.   The question is: will the Fine Gael backbenchers revolt?  Will the grassroots Fine Gael members around the country, most of whom are pro-life, revolt and turn on Kenny?  Perhaps the future of Ireland now depends on this.   Certainly silence will usher abortion into Ireland.   If I may turn the adage around: when good men and women remain silent, innocent children die.

Of course we have to be realistic and see that if Kenny turns and becomes pro-life to save the party, will Labour concede for the sake of the coalition?  Will its thirst for power overcome its evangelical campaign for abortion?  Or will the government fall?  I have no doubt that Kenny will be told by Gilmore that Labour will pull out of government if he does not play ball.   It may well be a game of chicken to see who turns first. With the last budget, the harshest one yet, Labour is not in the good books with many citizens and if there is a General Election they may well lose seats: that might be a consideration if Kenny is forced by backbenchers to stand his ground.  Of course a General Election may well yield a hung Dail.  It is all up in the air.

Time to pray!  And fast!  We need to turn human hearts and make backbenchers courageous.  Some say courage and politics are uneasy bedfellows.  I would not be so dismissive - we have had some marvellous politicians who were courageous, virtuous and saintly.  St Thomas More is one, and is now their patron, but also the late Aldo Moro, friend of Paul VI and murdered in 1978: a cause has just been opened for Moro.  So let us seek their intercession in these difficult times.  Meanwhile get ready for action.  We may need to take the streets on a regular basis in the coming months to convince our TDs that we the people are, ultimately, in charge, and we do not want abortion in Ireland.
Posted by Father Director at 8:00 AM