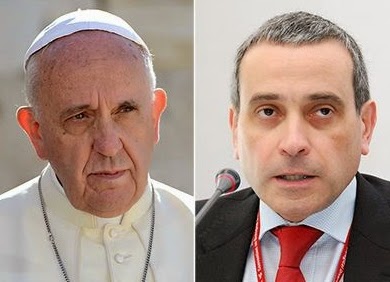 I note with interest the surprise some in the media are expressing with what seems to be Pope Francis's rejection of France's candidate as ambassador to the Holy See. The candidate, Laurent Stefanini, the media maintain, is openly homosexual, although other sources deny it, the man seems to have backing from some solid people in France. We don't know. However, the media reaction is telling. The Telegraph has an interesting article informing us that Francis's reputation as a liberal is now taking a hitting because of this supposed move. The journalist here, Henry Samuel quotes - or more correctly misquotes Francis's "Who Am I To Judge" remark, and wondered what has happened.

Well, actually, nothing has happened. You see, if the media had reported that remark as it was made and not according to their own agenda they would not be confused now. Francis said that if a gay person was living a good life, following the Gospel and nurturing a relationship with God, then who was he to judge them. And that is orthodox, old fashioned Catholic teaching. If someone adheres to the moral law laid down by Christ, regardless of their sexuality, living it and seeking holiness, then there is no issue. The Church does not condemn a person for their sexuality, but rather counsels us all to use our sexuality in accordance with the moral law (though it may be more difficult for some than others - sacramental grace is there to help those who have a hard struggle) .

This is what Francis meant, but it is not what the media reported. It reminds me of the story of Jesus and the woman taken in adultery, a story usually half-told. Jesus does not condemn the woman - he will not kill her for her sin because he is the one who will die for it. However before he lets her go he says, "Go, and sin no more"; this last bit is usually omitted and then leads to the error, propagated by some, that Jesus does not judge our sins.

As for this story, there are lots of unknowns, so caution.
Posted by Father Director at 6:00 PM