If You're Not In Kansas Anymore, Then.... 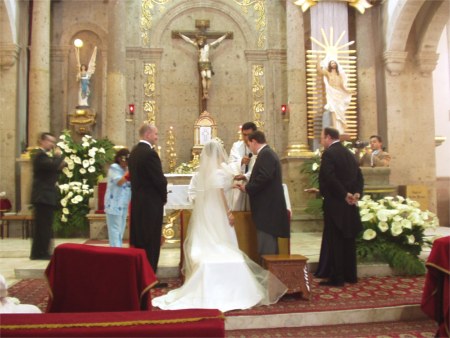 The media are starting to make a thing of the Irish Bishops's suggestion that should the gay marriage referendum be passed, the Catholic Church here may no longer carry out the civil aspects of weddings, The reason for this, as stated by the Bishops in 2013, will simply be the differing views of marriage held by Church and the State. The Irish Times refers to it as a threat, no doubt trying to paint the Church as the bad guy holding a gun over the heads of those in favour of the referendum. It is not a threat, it is an honest recognition of a serious rift and an abyss that cannot be bridged and so instead of limping along in denial, the Church will conduct her own affairs and let the State conduct theirs. Nor is it a matter of signing a form, as the Irish Times inaccurately suggests: it is about a priest serving as a solemniser of a civil marriage. This cannot continue should things change. If I may remodel a famous quote: If you're not in Kansas anymore, then do not expect things to stay the same... All will be changed utterly, as Yeats wisely wrote....

Of course should this happen you can expect the media to launch an attack on the Church. We will hear of lots of poor couples in a quandary, put out, having to spend more money and make arrangements in now over-crowded registry offices to solemnise a civil marriage on top of a religious one. We will probably not hear about how many countries in Europe already have separation of religious and civil weddings and no one gets upset, they just accept it and get on with it: they have the civil wedding first and then head straight to the Church for the sacramental wedding. That's what will happen in Ireland should the Bishops stick to their proposal if the referendum is passed.

This decision by the Bishops might also stave off attempts by some to force the Church to conduct gay marriages. I can see some sort of challenge emerging if the referendum is passed, a priest or minister who refuses to carry out a gay wedding being sued under equality legislation and the new position of the Constitution. In a conversation yesterday with friends it was suggested this would never happen since we have freedom of religion, however as we have seen equality legislation tends to overrule all other rights and freedoms nowadays, including religious freedom, so I would not be so optimistic. If we no longer carry out the civil aspects of marriage, the State may well no longer recognise Catholic marriages and so a case against the Church may not be able to proceed. But we shall see.

That said, it all depends on the outcome of the referendum, and given the serious issues which will arise should it be passed - not only for the Church, but for families and children, a no vote is not only prudent but better.
Posted by Father Director at 7:01 AM