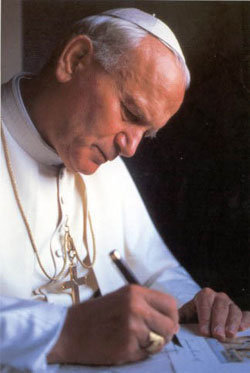 St Gregory of Narek is now officially a Doctor of the Church, following a ceremony in St Peter's today. I note with interest a post by Fr Z, in reality a petition to Pope Francis, to declare St John Paul II a Doctor of the Church. Father is certainly zealous and daring: he asks for it to be done on Divine Mercy Sunday next year, and even suggests a doctoral title: Doctor Misericordiae, the Doctor of Mercy.

This time last year I was at the canonisation, and after it I sent a tweet saying that now we had him canonised, the next process is to get him declared a Doctor, so I am in total agreement with Fr Z on this.

So, dear faithful, what can we do? Well, Fr Z has shown us: we petition the Holy Father - that's how it starts. The faithful, and then of course theologians, preferably groups of them, send formal requests to the Pope that a particular saint be considered for the honour. If there is merit in the requests, an investigation is opened in the Congregation for the Causes of Saints. As we know from incidents since his election, Pope Francis takes great interest in his post, so we have no excuse. Off we go.