A few years ago we organised a family holiday - the first in many years. We chose the week after Easter and decided we would go to Turkey - for those who liked the sun they had it, for those of us who liked history, we had it too. I was looking forward to a day trip to Ephesus. However, unrest broke out and my father took the decision we were not going to Turkey. So we opted for Sicily, again sun and history, everybody happy. The fact that Sicily was experiencing its worst weather in years did not make itself apparent until we arrived, and the sun people were disappointed. We were glad we booked a rental car. So the joys of Sicily lay ahead.

One of the trips we made was to Trapani, the birthplace of the Saint we celebrate in Carmel today - St Albert of Trapani. Albert was the first Carmelite to be formally recognised as a Saint by the Church, though the mysterious Berthold and Brocard, leaders of he first hermits are also honoured.  We all piled into the car and left our hotel in Palermo (if you can drive in Palermo you'll drive anywhere!) and headed across the island. Of course I was thrilled and looked forward to spending some time at tomb of our first Saint.

Albert was born in Trapani around the year 1250. The Carmelites had a house in Trapani and Albert was attracted to their way of life, entering the Order as soon as he was old enough, and was ordained a priest. He was transferred to the community in Messina where he fulfilled the office of preacher, working among the sailors who frequented the port there. He is credited with lifting the Siege of Messina in 1301 by offering Mass following which supply shops were able to get through the bockade. He had a reputation for holiness and people flocked to him seeking healing for their ailments. He was also successful in making converts to the faith. He held offices within the Order, including Provincial Superior in which capacity he attended a General Chapter in Bruges in 1297. He died in 1307.

We had a lovely afternoon in Trapani, we visited St Albert's house and the Carmelite Church. There is a beautiful silver statue of the Saint which contains his skull. When I asked where his tomb was I was informed: "Ah, he is in Messina!" - the other side of the island! That was that.

However the day did not end without another adventure. Just finished my Holy Hour in Trapani Cathedral I got talking with the Administrator - he invited us to come to a Mass in the one of the city churches, and before we knew it we were sitting among gusty Italians beginning the Novena to St Francis di Paola! We came to find Albert, we ended up rambling with Francis. We were knackered when we got back to Palermo. And yes, the sun came out, as we were driving to the airport! 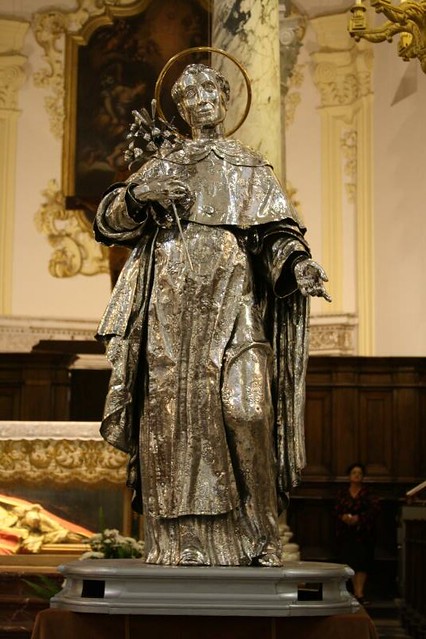 Silver Reliquary Statue of St Albert at his shrine in Trapani,
his skull is enshrined in the head