Although his feast is celebrated tomorrow, today is the 100th anniversary of the death of Pope St Pius X. Dying on the 20th August 1914 after a long struggle defending the faith and the liturgy, his heart was broken as he saw Europe torn apart by what he may have suspected would be a long and bitter war.

St Pius is loved and reviled in equal measure by conflicting groups within the Church. Traditionalists hold him in deep veneration for his identification of Modernism and his work to try and tackle its influence in the Church. Liberals despise him for the same work. That hatred is still there and is as intense as ever: in seminary we had a lecturer who tore into Pius as if he was still reigning and personally tormenting him. I believe Pius was correct in his analysis and work against Modernism, and I believe we still need to take note of what he said.

Of course Pope St Pius's pontificate was noteworthy for many other things. He is a Eucharistic Saint: his deep love for the Eucharist and the celebration of Holy Mass have not only left a lasting impression on the piety of the Church, but also in the practice of our children being able to receive Holy Communion at a younger age. This in turn has nurtured many young Saints and Saints to be: among them the little Blessed Shepherds of Fatima and numerous other Servants of God who died before reaching their teenage years. Pius was also concerned about music in Church and he urged greater use of Gregorian Chant, though he was not so keen on more elaborate settings of Sacred Texts for fear that they would distract from the mystery. While I do like various forms of Sacred Music, I think Pius and I would agree when it comes to some of the stuff we have had to endure in Church for the last forty years. I am one with Scottish composer James MacMillan when it comes to critiquing contemporary Church music.

For us Discalced Carmelites, Pope St Pius occupies a special place in our hearts. It is believed that he may have been a member of our Secular Order of Discalced Carmel. He was a great support to our friars when they were setting up the Curia on the Corso d'Italia in Rome, and in thanksgiving for his kindness and generosity there is a monument dedicated to him in the Curial Basilica of St Teresa, and, of course, now an altar. One of his simars and a sash are also preserved as relics in the Church. So tomorrow will be a day of special remembrance for us in the Order.

And finally, there is another reason why Pius is dear to my heart. One of the first relics I was given was an ex corpore of St Pius given to me by my late singing teacher, Evelyn Dowling. When I began my studies for the priesthood she entrusted it to me and commended me into his care. I have the relic just beside me now as I write. As it is a precious memento of the Saintly Pontiff, it is also a remembrance and connection with her, she was very much like a mother to me: so I will remember her in my Mass tomorrow; perhaps you might also remember her. 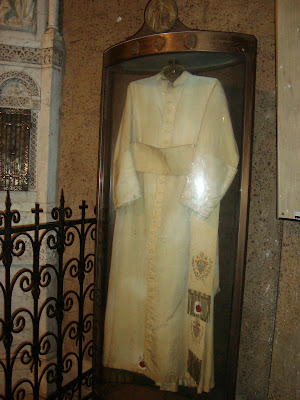 Pope St Pius X's simar and sash in the Carmelite Basilica of St Teresa of Avila,
at our Curia on the Corso d'Italia, Rome
Posted by Father Director at 5:55 PM