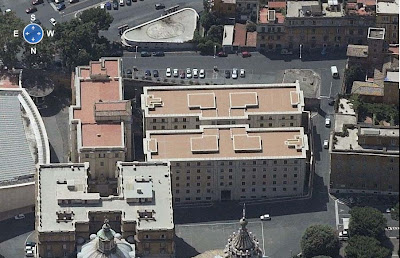 I am a little disturbed by some news coming from Vatican City: it seems there will be a halt to hiring new workers and a pay freeze is to be put in place.  The country is tightening its belt because of financial pressure.  That's fair enough - if the money is not there, then measures have to be taken.  But I do have to question these measures (remember Vatican workers are not the best paid in the world) when the Holy Father has engaged a number of top consultancy firms to help him reform the Curia and carry out other tasks. These firms are charging the Vatican top dollar rates for their services.

There is also the issue of the car park on the Italian side of the Italian/Vatican border which is situated just under the Domus Sancta Martha.  Because the Pope is not living in the secure Apostolic Palace but in the Domus, part of the security arrangements was to close off the car park (for fear of car bombs), to the fury of Roman locals who use it, and pay parking fees for every hour of every day every week.  That is bleeding thousands from Vatican coffers. I have been told that the locals are taking the Vatican to court to get their car park back.  Anyone who has lived in Rome will know how difficult it is to get parking space and locals are desperate to get a space within walking distance of their apartments. How can the Vatican defend restrictions on loyal workers when so much money is being wasted?

Perhaps such issues will fall to Cardinal George Pell as he now heads a new department within the Curia to regulate financial matters, the Secretariat for the Economy.  This is part of the reform process, and a most welcome development.  It is in reality a department of finance and with Cardinal Pell running it, it will be in good hands.  Of course the Cardinal will be coming to Rome to run the Secretariat.  While that is good in one way, he will be a serious loss to the Church in Australia. Cardinal Pell has been a strong advocate for reform and fidelity in Australia, and I am sure orthodox Catholics and priests will miss him should he have to leave.  Australia's loss will be the Church's gain as having him in Rome will certainly be a bonus for the cause of authentic renewal.  But I would urge him to tackle the car park issue.

John Allen, now working for the Boston Globe, addresses the issue of a repeat of '68 - the Humanae Vitae crisis, following October's synod on the family.  You may remember I addressed this issue a few weeks back.  It seems that senior Vatican staff agree with me and fear that we may well see history repeat itself.  Allen is not so sure. He says that Pope Paul VI never enjoyed the popularity of Francis, and with his moral authority already established, Francis would weather a storm better than Paul and people may well think that the decision that is made may may have been made in spite of him.  That is a good point.

Allen also says that the issue of Communion for the divorced and remarried is really an internal issue, and does not carry the same symbolism as the pill did in the 1960s.  That too is a point, however, we must remember that one of the major issues today is that of marriage and the Pope's decision will hinge on the question of what the Church recognises as marriage, its indissolubility, its exclusive nature.  In broad terms a reiteration of that may well anger many inside and outside the Church, and given that many Churchmen are already fixing their colours to their masts, there may well be the possibility of a schism. Some German dioceses, for example, may well decide that if Francis will not endorse their point of view and what some of them are already doing, they may well decide to go alone and reject the Holy See.  That did not happen in '68, but it may in 2015 or whenever the post synodal exhortation is promulgated.  Hopefully not; we must pray. 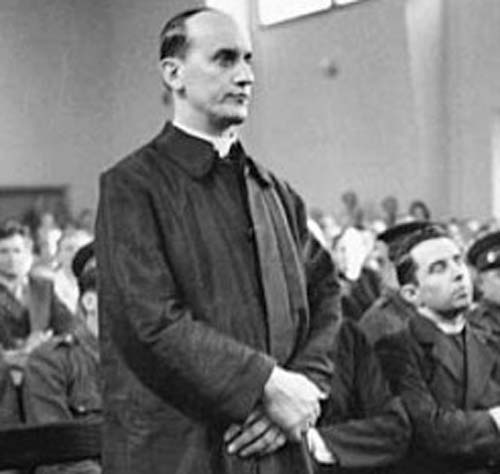 Blessed Alojzije Stepinac on trial under the communists

And finally, I'm not sure if you saw this: the way is almost clear for the canonisation of Blessed Alojzije Stepinac, the martyr Cardinal of Croatia.  It seems a miracle is progressing and has been passed by medical experts.  I think it remains for the Holy Father to pass it and issue the decree of the miracle.  Cardinal Stepinac is a controversial figure, particularly in the Balkans. He is accused by Serbians of working with the Nazis in a puppet regime which had been set up in Croatia during the Second World War.  These accusations were used by the communists to imprison him and ultimately kill him.  Historical investigation, however, has proven these accusations to be without foundation, but like Pius XII, the mud has stuck and certain quarters will not accept that he was innocent.  Serbians opposed his beatification, and will no doubt also oppose his canonisation.
Posted by Father Director at 4:27 PM