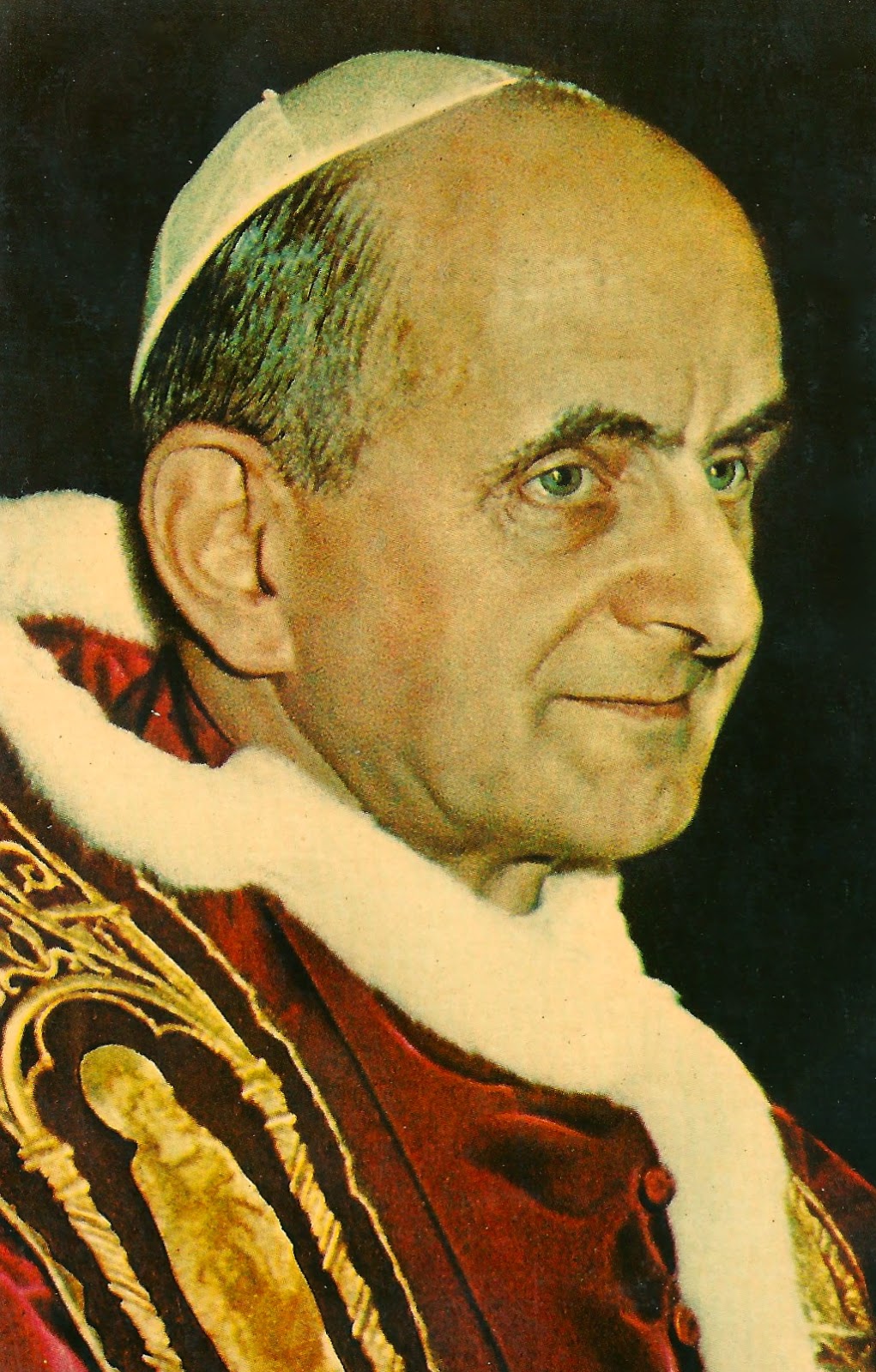 In the past few days it has been announced that a miracle has been approved by the theologians in the Congregation for the Causes of Saints for the Venerable Paul VI.  The documentation now passes to the Prefect and members of the Congregation and then to the Pope, but as the medical experts and now the theologians have passed it, the final steps should be a formality.  We could see Pope Paul beatified by the end of the year.  If there is a possibility of a repeat of the Humanae Vitae crisis following the synod in October, that beatification would be timely and providential.

Many people have difficulties with Pope Paul, particularly those who disagreed with his decisions with regard to the liturgy.  As I have said before it was a crazy time, not every decision made was a good one, not every reform was implemented faithfully and Pope Paul did make mistakes, as does every Pope.  We do have to remember, however, that though he was a complex person, highly sensitive, perhaps overly optimistic and maybe at times a little naive, when it came to the crunch with regard to the issue of life, not only was Paul not found wanting, but he was heroic and nothing less than a prophet. Humanae Vitae is one of the most prophetic documents of the contemporary Church in which we see that Pope Paul could join the dots when even some of the great theologians failed to, and he could foresee serious pastoral and human problems down the road when even the most pastoral and astute bishops could not.  He had good people around him to support him - Cardinal Karol Wojtyla, whose influence on Humanae Vitae can be easily discerned, and the English language editor of Osservatore Romano, Fr Lambert Greenan, OP, an Irish Dominican.

I remember spending a whole afternoon with Fr Lambert when over in Irondale, AL, having finished recording a series of Forgotten Heritage.  He was living with a congregation of sisters helping them write their constitutions.  He spoke of those turbulent years and his own struggle to defend the Pope's teaching on life.  Many English speaking bishops rejected Humanae Vitae and their statements in response to the encyclical were less than faithful to the successor of Peter.  Fr Lambert refused to publish many of these statements, raising the ire of these bishops.  He told of one encounter in which a bishop stood in the office of Osservatore Romano tearing strips off the friar, and threatening him.  It was like water off a duck's back to Fr Lambert - he told the bishop that as long as he rebelled against the Pope no statement or article from that bishop's pen would ever be considered for publication.  Fr Lambert stood by the Pope, and Paul was grateful for such fidelity.  In that conversation Fr Lambert shared his observations, revealing the extent of the Pope's suffering, his lonely journey to Calvary, and they certainly deepened my appreciation of the pontiff.

Of course though some faithful souls supported him, it did not diminish the weight of the cross Paul had to carry, and if Fr Lambert was being regularly abused by unfaithful bishops we can imagine what Paul was getting.  That suffering would eventually kill him, the last straw was the murder of his friend Aldo Moro, now Servant of God himself.  Virtue is perfected in suffering and the diamond which emerges from the furnace of suffering is holiness: this is the legacy Pope Paul leaves us.

With the benefit of hindsight we see the prophetic truth in Humanae Vitae, though many still continue to deny it as the fruits of the culture of death diminishes the value of human life, promiscuity is destroying more and more lives and the bodies of millions of dead children pile up in abortion clinics all over the world.  With all that still to manifest itself clearly, and with, it seemed, the whole world against him, sensitive, poetic, gentle Paul, must have been tempted many times just to give in to ease the burden: but he didn't. He knew what was right and if he had to let them crucify him in order to witness to what was right, then so be it.

I see Paul as the suffering pontiff of the 20th century, that is where his greatness lies.  I have no doubt that his beatification will raise the ire of many in and outside the Church, but for the faithful, those committed to the Gospel of Life, his elevation to the altars will a sign from God that one day those working and suffering for the cause of life will be victorious.  May the Venerable Paul VI pray for us all and may his beatification strengthen us and fill us with joy: God will have indeed raised up a Prophet for Life in our midst.

A worn out Venerable Paul VI at the funeral of his murdered friend Aldo Moro on 13th May 1978, a few months before the Pope's own death.
Posted by Father Director at 11:25 AM