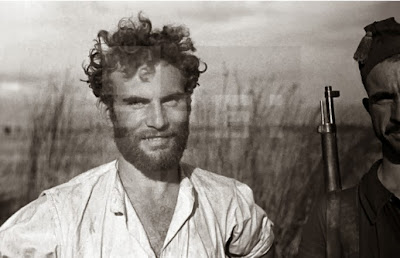 Have a good look at these photographs and ask yourself: what is going on here?

Perhaps you might think that the first is of two friends, one a soldier, posing for a photograph on a fine sunny day.  And the second is of a worker in the fields, a handsome young man, enjoying his youth and the fresh air, a young man invigorated by his work.  He is relaxed, his eyes full of joy and peace; his hands are leaning on his hips.  In the first photograph he is laughing.

If you have seen these photographs before you will know the story behind them.  If not, then time for an explanation.  The young man in both photographs is twenty-five year old priest Martin Martinez Pascual.  The day is 18th August 1936, and a few moments after these photographs were taken the young priest was martyred for his Catholic faith.  The photographer was Hans Gutmann, a supporter of the Republican cause and he wanted to capture the priest's last moments.  Fr Martin was fully aware that he was about to die, and yet he stood calmly beside one who was about to shoot him and smile for the camera.

Martin was born on the 11th November 1910 in Valdealgorfa in Aragon, Spain.  He discerned a vocation to the priesthood at an early age and entered the seminary in Belchite. In 1934 he joined the Diocesan Worker Priests of the Sacred Heart, and was ordained on the 15th June 1935.  He was appointed Prefect of St Joseph's College, Murcia and professor at the seminary in San Fulgencio.

The following summer, he went to his home for his vacation when the persecution of Catholics began in July 1936.  He hid out in a friend's house, and later moved to a cave for safety.  In August he heard that his father had been arrested, so he left his place of refuge to try to save him.  On the 18th August Martin went before the committee that was examining Senor Martinez and there they discovered that the son was a priest. He was immediately arrested, and that same day brought out and shot with other priests who had also been captured.   Just before he was executed, a moment after those photographs were taken, he was asked if he wanted to turn away so he would not see the guns.  He refused, saying he wanted to ask God's forgiveness for those who were killing him and to give them his blessing".

Blessed Martin was beatified on the 1st October 1995. His feast day is the 18th August.

Why did I choose to share this with you?  Look into his eyes, see the joy.  That is the grace of martyrdom. Do not be afraid!
Posted by Father Director at 7:01 AM