One of the few places I was determined to visit when in Krakow was the shrine of St Albert Chmielowski, the artist turned religious brother who devoted to life to serving the poor and homeless in Krakow at the end of the 19th and beginning of the 20th centuries.  He was a friend and spiritual child of one of our Carmelite friars, St Raphael Kalinowski, and he was canonised with him by Blessed John Paul II.  The same pontiff wrote a play about St Albert, Our God's Brother.

St Albert's shrine is in the outskirts of the city, at the Ecce Homo Sanctuary which is run by the congregation of sisters he founded, the Albertine Sisters.  His original place of work was Krakowsa Street and his Brothers still live and work there.  I managed to visit both places.  Krakowska Street is in the Kazimierz area of the city, and the mother house of the Albertine Brothers is there.  There is no public shrine, the brothers quietly continue St Albert's work, housing the homeless, caring for the poor and working with alcoholics and others enslaved by addiction.  One of the brothers, Br Pawel welcomed me to the house and gave me a little tour, included in which was some moments in prayer in the little community chapel where St Albert prayed with his first brothers.  It is still the community chapel and when I visited some brothers together with residents and homeless people were spending time in adoration.

St Albert was born Adam Chmielowski in the outskirts of Krakow in 1845 into a wealthy and aristocratic family.  Losing his parents at a young age, it fell to Adam to prepare to take over the estates, and so when old enough when to university to study agriculture.  However, a Polish nationalist, he got involved in politics and when the insurrection against the Russian occupiers in 1863 took place he was in the thick of it, losing a leg in the fighting.  With the failure of the insurrection, Adam had to flee Poland, settling in Ghent in Belgium where he took up studies in Engineering.  At this time he discovered he had a talent for painting.  Travelling to Paris and Munich he furthered his artistic studies and began to produce competent paintings.

St Albert (on the left) with his siblings

In 1874 he was able to return to Poland, taking up residence in Krakow where he worked as an artist and gained a considerable reputation.  He also found himself getting involved with work for the poor and homeless in the city, and this would lead him to a deeper reflection on his  life and to a conversion.  His work began to take a religious turn.  Among the works he produced, he began a painting of the Ecce Homo, one informed by his conversion, his meditation and his work with the poor.  He would spent a number of years working on this painting and to this day, while it remains unfinished, it is a masterpiece, a powerfully moving meditation on the suffering Christ. 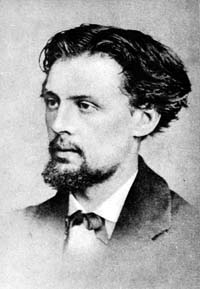 St Albert during his years as a painter in Krakow

In 1887 Adam decided to give up his artistic career and devote his life to the poor.  He joined the Franciscan Third Order, changed his name to Br Albert, donned a grey habit and took up residence in a shelter for the homeless.  The following year he professed the vows, this would be the beginning of a new religious congregation.  Working among the homeless and alcoholics, he inspired many with his wholehearted dedication, his faith and simplicity.  Young men sought to join him, and professing vows and donning the habit, his congregation was born.  A young woman, Maria Jablonska was also inspired and she with some other young women joined Albert in his work.  They also professed vows forming a congregation of sisters; Maria, now Mother Bernardyna as co-foundress was appointed superior.

With the congregations growing, with the advice of St Raphael Kalinowski, Albert founded contemplative houses for the brothers and sisters in the mountains so they could go for periods of time for retreat and recuperation.  Aware that he and his followers were religious in the service of the poor and not social workers, facilitation for prayer and spiritual development was vital.

St Albert in his later years

Albert was devoted to the poor.  Once he was criticized for feeding alcoholics who would spend their whole day drinking.  Albert's response was simple and decisive.  Yes, he fed them: he gave them their breakfast so that they would not drink on an empty stomach.  He knew he could not start preaching to the person as soon as he met them, first he had to save their lives - prevent them from drinking on an empty stomach and save their liver.  Then, he said, when the liver is saved it is time for the head, the heart and the soul.  He was a practical and pragmatic man.

St Albert's relics are enshrined in a little chapel at the Ecce Homo shrine at Woronicza Street in the north of Krakow.  The sisters there gave me a wonderful welcome.  Sr Michaela showed me around and, with not a word of English, explained everything and me with not a word of Polish!  I didn't understand a word she said, but I understood the sentiments, the signs and the hospitality, and it was brimming with kindness and goodness.  The spirit of St Albert is alive and well in his Sisters and Brothers.  So if any of you are planning pilgrimages to Krakow, go to the Ecce Homo Sanctuary.  There, above St Albert's reliquary, hangs his painting of the Ecce Homo and it is a sight to behold; it draws you in. 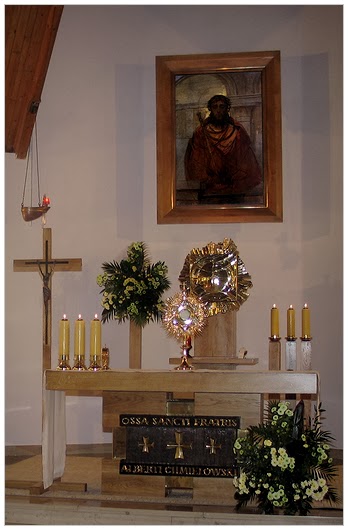 Ecce Homo Sanctuary: tomb of St Albert (in the altar) with his Ecce Homo painting
Posted by Father Director at 7:29 AM