Inching Their Way To The Truth 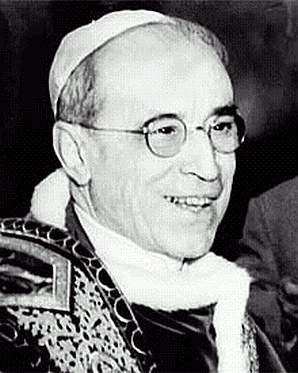 I suppose I should use the metric system rather than the Imperial, not because the metric is modern, but because a millimetre is much smaller than an inch, and because Yad Vashem, Israel's national memorial to those who died in the Nazi holocaust, have only moved a millimetre in response to the now overwhelming evidence that proves that the black legend about Pope Pius XII is not true.

Those curating the exhibition in the memorial have revised the part of the exhibit dealing with Pius and the controversy surrounding his wartime record.  But the exhibit is still factually misleading and untrue, relying on ideological criticisms rather than actual historical evidence.  They need to listen to fellow Jew Gary Krupp of the Pave the Way Foundation, but so far they are resisting.  But at least, I suppose, even though it is a tiny move, it is a move in the right direction.

Personally I believe this issue will become like the Crusades, the Inquisition and the witch-burnings.  Genuine scholars will know the truth, write about it and present the complex reality which is very different from the biased history popular writers and ideologues peddle, but most people will not know the truth and take for granted that the black legends are true.

So the Holy Father should just go ahead and beatify Pius.  The Vatican conducted its own meticulous research, delaying the promulgation of the decree of heroic virtue for two years in case any of the accusations might happen to be true.  The records dealing with the Pontiff's wartime years will be available soon - the cataloguing is almost complete and then scholars can go in and research as much as they like.  I wonder, will the most vociferous of Pius's critics revise their opinion when (if??) they go in to examine the documents, or will they just claim that the Vatican is hiding the real evidence?  And then will there be more books?  Nothing sells books like good old Vatican cover ups be they real or imaginary.

And as they peddle the lies about Pius, the world ignores the horrors which are taking place today, and this has to be one of the most awful: genetically modified people.  Yes, I'm not talking about GM foods here - they have moved on to people.  According to the Daily Mail thirty genetically modified babies have been born - thirty healthy babies - I'm sure the body count is higher than that as scientists worked to perfect the process.

Two of these GM babies have genes from three parents - two women and a man!  I would echo the words of John Smeaton of SPUC who said: "'One has tremendous sympathy for couples who suffer infertility problems. But this seems to be a further illustration of the fact that the whole process of in vitro fertilisation as a means of conceiving babies leads to babies being regarded as objects on a production line."  Indeed worse than that: scientists, people, now think they are masters of life, that they can create human beings according to they want them to be, their traits, their looks, their ablities.  This will ultimately enslave humanity to the will of the strong.  Where have we heard ideas like that before?

I think people need to read Mary Shelley's Frankenstein which deals with the whole issue of man trying to create life - it causes more problems that it solves.
Posted by Father Director at 8:00 AM