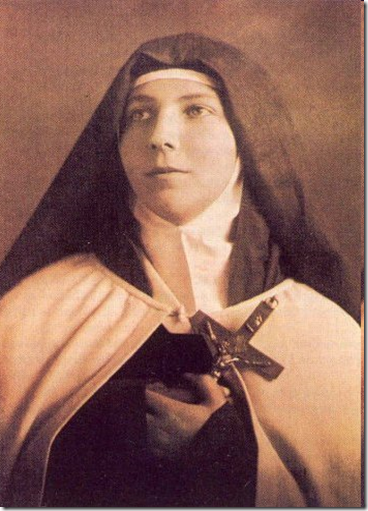 Yesterday was the feast of married couples, today in Carmel we celebrate a feast for young people as we commemorate St Teresa of the Andes.  Teresa died at the age of 19, and yet she achieved more in those few short years than many do in a long life.

Born Juana Fernandez del Solar in Santiago, Chile, on the 13th July 1900, she grew up in a comfortable home where the faith was cherished, but the possibility to life a life of ease and privilege a temptation.  Already pious, it was when Juana read the life of St Therese that she was inspired to seek holiness. She began a programme of living virtue, but she found a serious and difficult barrier to overcome - her temper. She was quiet self-centred, and so humility was a struggle.  However the determination in her character helped her overcome these faults and made open to the needs of others.

When she was 19 she entered the Carmelite monastery in Los Andes and was given the name Sr Teresa of Jesus.  Happy to spent the rest of her life, she sought to be of service to others through her prayers, sacrifices and letters.  As a novice she lived the life with extraordinary dedication and humility, impressing the sisters in the community.  The sisters were aware that they had another St Therese in their midst.  However it was not to last long.  After a few months, she contracted typhus: it was diagnosed as fatal.  Teresa embraced her death as a sacrifice to be offered.  Aware that she would not see the end of her novitiate, the decision was taken to allow her make her Solemn Profession.  Teresa died on the 12th April 1920.  She was beatified in 1987 and canonised in 1993.

St Teresa is a marvellous patron of the young - full of life and committed to her faith she offers to young people an example of joyfulness in faith.  As a young person who quickly forgot about herself in order to serve others she reminds us that many young people feel the need to do likewise.  There is a tremendous generosity in the young, and this must be encouraged.  Our culture today tells young people that in order to satisfy themselves and be who they are meant to be they have to look after themselves, fulfill their own desires.  The Christian faith, and St Teresa teaches otherwise: it is in giving of themselves that the young find themselves.

One of St Teresa's sayings was "I am God's" - realising that she was a child of God but also one called to serve God and to accept from him the wonderful plan he had for her life - this is the message we need to communicate to our young today.
Posted by Father Director at 8:00 AM

Email ThisBlogThis!Share to TwitterShare to FacebookShare to Pinterest
Labels: St Teresa of the Andes, young people