The Feast of Marriage 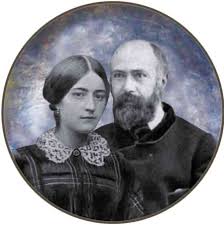 In Carmel today we celebrate the feast of Blesseds Louis and Zelie Martin, the parents of St Therese of the Child Jesus.  In doing so we also celebrate the sacrament of marriage within which these two holy people were sanctified.  Indeed today was chosen as their feast day because it is their wedding anniversary.

If ever there was a time to celebrate marriage and holy married couples it is these difficult times.  Given the attack on marriage and the legitimacy being according irregular relationship be they heterosexual or homosexual, the example and intercession of a married couple provides us with an antidote and a sign of hope.

When I was doing parish work in New York as a seminarian I befriended a wonderful married couple, Nancy and Jim - they were involved in Marriage Encounter.  They taught me a lot about the sacrament of marriage, and Nancy was always at pains to remind us, and quite rightly too, that the sacrament is lifelong - it isn't a flash of grace after the vows which is never repeated - grace is continually being poured on the couple - each being a minister of grace for the other.  That grace is given to help the couple live as one body and bring forth new life into the world.  It is there to sanctify the couple, as we see in Louis and Zelie, and to make them witnesses to Christ's love for the Church through the sacred bond which unites them.

This is a wonderful theology - a wonderful reality.  This is what we in the Church need to begin to teach again. It is for this reason that marriage is a relationship like no other: it is the only relationship which is a sacrament.   In no other relationship is grace poured out as in that of husband and wife. It goes without saying I am speaking of marriages which are conducted in Church before a priest or deacon.

Blesseds Louis and Zelie were beatified because they were sanctified through their marriage - not because they are the parents of St Therese.  In fact if we look at the writings of St Therese we see that she came to love and live her faith thanks to the teaching and example of her holy parents.  It was Louis and Zelie who are partly responsible for the great holiness of their daughter.  Holy parents can bring Saints into the world (not all the time, some Saintly parents had the cross of irreligious children).  We see other holy parents who have holy offspring - the parents of L'Arche founder Jean Vanier are being considered for beatification and their holiness had an enormous influence on Jean whom many consider to be a saint himself.

Today, then, let us commend to the intercession of Blesseds Louis and Zelie all our married couples, may the Lord sustain them in the sacrament of their marriage.  We pray for those in irregular relationships, that they may be reconciled. We pray for those trying to resist the redefinition of marriage, may this Holy Couple obtain from the Lord the grace to sustain them, give them courage and wisdom, and the skills to touch the hearts of our legislators. 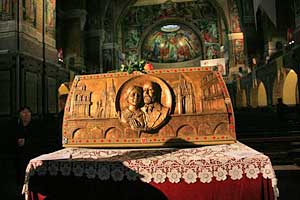 Reliquary containing the bodies of Blesseds Louis and Zelie

Christopher McCamley over at the Catholicus blog has the collect and reading from the Office of Readings for today's feast.  The reading may be of interest to you, it is taken from Blessed Zelie's letters.
﻿
Posted by Father Director at 8:00 AM