St Michael, Our Protector In These Times 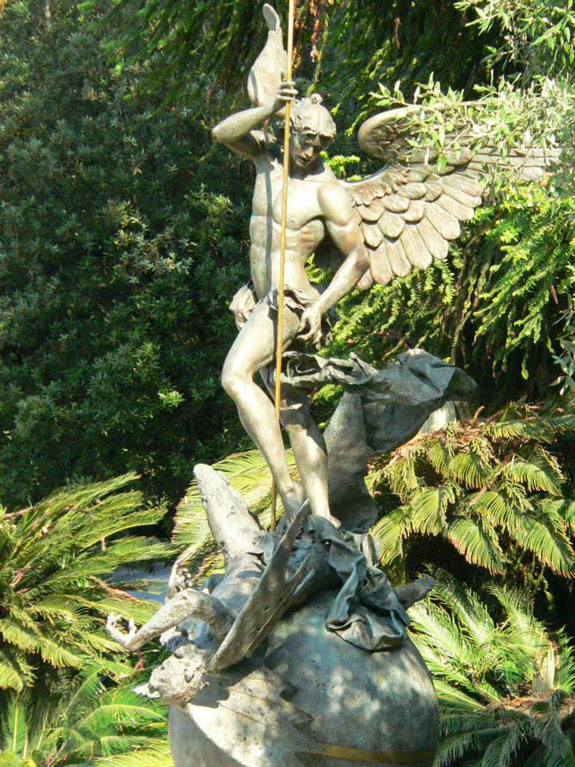 ﻿
Last Friday was an extraordinary day - so much happened.  One event which passed over many heads was the inauguration of a new statue of St Michael the Archangel in the Vatican Gardens, attended by Pope Francis and Pope Emeritus Benedict.  It was an extraordinary event because the Holy Father is drawing our attention to the great Archangel who has played an important role on the devotional life of the faithful for many centuries.  While devotion to him should never really wane, it has in the past few decades, yet of late devotion to him is growing again, and this event highlights the need for his intercession.
Here's what the Holy Father said at the dedication:

In the Vatican Gardens there are several works of art. But this, which has now been added, takes on particular importance, in its location as well as the meaning it expresses. In fact it is not just celebratory work but an invitation to reflection and prayer, that fits well into the Year of Faith. Michael—which means "Who is like God?"—is the champion of the primacy of God, of His transcendence and power. Michael struggles to restore divine justice and defends the People of God from his enemies, above all by the enemy par excellence, the devil. And St. Michael wins because in him, it is God who acts. This sculpture reminds us then that evil is overcome, the accuser is unmasked, his head crushed, because salvation was accomplished once and for all in the blood of Christ. Though the devil always tries to disfigure the face of the Archangel and that of humanity, God is stronger, it is His victory and His salvation that is offered to all men. We are not alone on the journey or in the trials of life, we are accompanied and supported by the Angels of God, who offer, so to speak, their wings to help us overcome so many dangers, in order to fly high compared to those realities that can weigh down our lives or drag us down. In consecrating Vatican City State to St. Michael the Archangel, I ask him to defend us from the evil one and banish him.

We also consecrate Vatican City State to St. Joseph, guardian of Jesus, the guardian of the Holy Family. May his presence make us stronger and more courageous in making space for God in our lives to always defeat evil with good. We ask Him to protect, take care of us, so that a life of grace grows stronger in each of us every day.

As indicated in the speech, the Holy Father dedicated the Vatican City State to the Archangel, a necessary gesture I think given the nature of the attack which is constantly being unleashed on the Pope and the State.
I think we Catholics need to recover our devotion to St Michael, and entrust to his help the difficulties and challenges we face in these times.  There is little doubt that the evil one is running riot at the moment - he seems to have ensnared so many souls and it seems many have given themselves over to his service either knowingly or unknowingly.  As preternatural forces are at work, we must call upon the supernatural forces of the God, Our Lady, the Angels and Saints.  Given that St Michael is the great defender of the Church, we must have particular recourse to him.
Michael assures us that evil can be overcome because it is already defeated thanks to the victory of Jesus Christ.  The evil one wants to delude us, mislead us into thinking that good and evil are equals in the battle - they are not - good, God, is the strong, and he has already triumphed: we need only fly to find refuge in the ranks of his army.  Michael, seen most often crushing the devil, offers us great confidence in this victory, and he is there to stand by our side as we too fight the wiles of evils, offering us the benefit of his strength, protection and wisdom.
So let us all entrust ourselves to the protection and intercession of St Michael.  I hope all of you have a statue or image of him somewhere in your home - if not, get one, have it blessed and consecrate your family and home to him.  Pray the prayer to him every day, particularly after Mass, as we do in our parish here.
As I have found myself so many times, St Michael is powerful, he loves us and he sees his protecting us as his expression of his deep love of God.  So let us shelter in his wings and have confidence.
Posted by Father Director at 8:00 AM