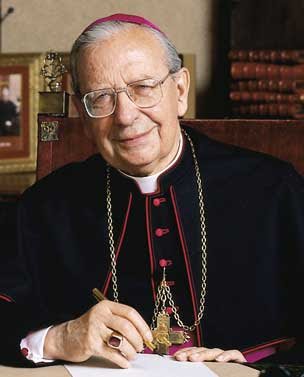 The Venerable Alvaro del Portillo and the Venerable Nicholas d'Onofrio
While Blesseds John Paul II and John XXIII dominated the news yesterday, the Holy Father advanced the Causes of a number of others also.  For a quick look at these men and women who are on the way to beatification see the Vatican news service here.
But taking a few of them.  First of all the Holy Father signed the decrees of the miracle for the Venerable Alvaro del Portillo, Bishop and first successor of St Josemaria Escriva as leader of Opus Dei. Venerable Alvaro was one of St Josemaria's first companions and proved himself a humble servant.  He was renowned for his holiness, gentleness and zeal.
Pope Francis has also recognised the martyrdom of various groups of men and women martyred in Spain during the Spanish Civil War: I presume all of these will be included in the large group being beatified in October.
Then the Holy Father signed a number of decrees of heroic virtue, raising some Servants of God to the rank of Venerable.  Among them is the young Camillian seminarian, Nicholas d'Onofrio.  Nicholas has been growing in popularity among the young. He died at the age of twenty-one as he was preparing for priesthood within the Camillians: he was never ordained, but like many young Saints before him he achieved great sanctity in the few shorts years that were allotted to him.  Now he needs a miracle if he is to be beatified.
Posted by Father Director at 8:00 AM