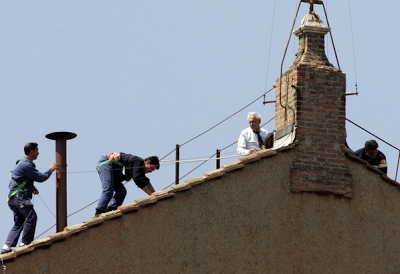 Well, there is it: the most famous chimney in the world, and perhaps even in all of history.  The Vatican City workers have put it in place on the roof of the Sistine Chapel, ready for the eyes of the world to anxiously study its output from Tuesday evening on.
Yes, as you all know the Conclave begins on Tuesday, the first vote will take place on that evening, and smoke, black or white, will pour out of the chimney around 7pm.  It is all about to begin.  The Vatican has released the timetable for the Cardinals.  If you have not seen it yet, here it is (Roman time - GMT + 1).
Tuesday, 12th March
From 7.00 am  Cardinals move into the Domus Sancta Marthae.
10.00am  Holy Mass for the Election of a Pope in St Peter's Square.
3.45pm   Cardinals leave the Domus for the Pauline Chapel.
4.30pm   Solemn Procession of the Cardinals from the Pauline Chapel to the Sistine Chapel.
4.45pm   Administration of the solemn oath and then the "Extra omnes" - everyone out, and the Sistine Chapel and environs are sealed: Conclave has begun.
Meditation by Cardinal Grech
First Ballot
7.15pm   Vespers
7.30pm   Cardinals return to the Domus for dinner and "lockdown".
Wednesday, 13 March (and subsequent days of the Conclave)﻿

7.30am Transfer to the Sistine Chapel

4pm  Transfer to the Sistine Chapel


On Tuesday we can expect smoke about 7pm, and unless they are all of one mind so soon, it will be black.  After that we can expect smoke after every two ballots if a pope is not elected as both ballots are burned together.   If a pope has been elected, then that last ballot will be burned immediately.
So that may be the pattern of our lives from Tuesday on: keeping an eye on those four moments each day.  I'd imagine very little work will be done in Rome, and many will have their coats at the door and ready to run too St Peter's at a moment's notice.  It is amazing to see how many get to the Square for the announcement - there is about 40 minutes between white smoke and the Cardinal Protodeacon coming out onto the balcony.
As with the last election, when a pope is elected, the white smoke will be accompanied by the great bell of St Peter's ringing out - discerning the colour of Conclave smoke, despite all the practice, is not an exact science.
So we'll ensure we are not far from a television for the next week, keep mobile phones on, have your iPad in your bag and make sure you are never far from free WiFi.

On Sunday the Cardinals will celebrate Mass in their titular Churches around the city, on Monday they will meet for the final General Congregation, then an early night to ready themselves for the Conclave.   Bear in mind that this weekend will be the last weekend of freedom for one of them.  Let us keep them all in our prayers, especially the one who will be our new Pope.  May the Lord prepare his heart to be our Holy Father.


Posted by Father Director at 6:32 PM

Email ThisBlogThis!Share to TwitterShare to FacebookShare to Pinterest
Labels: conclave 2013