The Pope of Christ's Poor 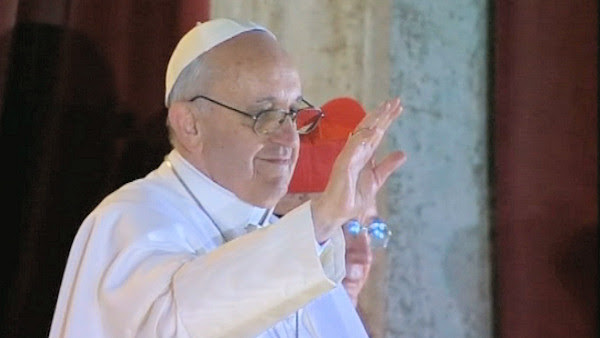 Our new Holy Father certainly has an impressive record.  His simplicity and humility apart, he has been a staunch defender of human life, Catholic morality and social justice issues.  He is, in fact, a real Catholic, one who transcends the usual political tags of conservative and liberal: like Benedict and John Paul II, he is orthodox.  He would be considered "conservative" on moral issues, but "liberal" on social justice issues: that's just Catholic.  He also knows what is right and wrong when it comes to the struggle for social justice - he is no fan of liberation theology.  He is heroic - he has taken on the secularist government of Argentina in defence of human life and the family: he was publicly rebuked by the president.  Indeed the media have started to attack him already - that can only be good!
There are many things to delight us in this holy Pope.  First of all he sees holiness as important - the aim of the Christian life, and like his two predecessors he preaches this holiness first by the example of his life - just like his namesake St Francis.  This is wonderful because this is at the heart of the reforms of Vatican II: the universal call to holiness.  Pope Francis continues the Council's teaching in this regard.  In terms of the Popes we have had for the last 150 years, Pope Francis is a man of tremendous personal holiness: we have another Saint, my friends!
Secondly, he understands the Church's spiritual traditions.  He is a Jesuit, but not in the mould of modern Jesuits who eschew traditional spirituality, he is a simple son of St Ignatius, adhering to his founder's teaching and spirituality.  In his years as a superior in the Society he sought to bring his brother Jesuits back to the charism of their founder.  He made many of them unhappy with this.  We may well see a reform of the Jesuits on the cards.
In terms of this traditional spirituality, in Pope Francis we see the faith of the poor.  You do not hang around the simple poor without seeing the value of their faith and devotion: they are at the heart of real traditional Catholicism.  Too often in recent times traditional Catholicism has been associated with the Tridentine Mass and its various liturgies, but it is bigger than that: the holiness of the poor - that is traditional Catholicism and if we are to get the liturgy right we need to remember that piety.  I was deeply touched by Francis's prayers on the balcony - how simple, how devout, how appropriate.  And the people responded: an Our Father, Hail Mary and Glory be for Pope-Emeritus Benedict.
The Holy Spirit is speaking to the Church.  He is not rejecting the Pontificate of Pope Benedict XVI, He is complimenting it.  As I have said before God is working to a programme and in each of the Popes we see different witnesses who fulfill various missions in the ongoing reform.  I think after Blessed John Paul brought us in and as Benedict taught us, Francis will touch us with his humility and help us see that we must all become Christ's poor.   Indeed he will confound the Church's critics by his own poverty and, perhaps, bring many back.
This will, I think, be a simpler Papacy, perhaps like Blessed John Paul's, though not as dramatic in an external sense.  I believe the young will love him - he will smile and reach out to them and their hearts will melt.   His clothing will be simple: we may not see the vestments and traditional clothing revived under Benedict, but like John Paul he'll be happy with his simple cassock.  That may frighten some who were delighted with all the traditional papal attire coming back, but at the end of the day these things are secondary.  If he keeps Mgr Marini as his master of ceremonies there may be some wonderful clashes ahead, we shall see.  Of course he will have to make changes: he is now Pope and that means he will have to reorient his life and habits.  But that's where humility comes in.  For one thing, he will not be cooking for himself any more - he won't have time!
And note the first appointments in his diary: a visit to Our Lady at St Mary Major's and a visit to Pope-Emeritus Benedict in Castel Gandolfo: a good start.
Anyway, just a few thoughts.  Let us all pray for our new Holy Father: may the Lord bless him abundantly and assist him in the task which has been laid on his shoulders.
Posted by Father Director at 8:00 AM