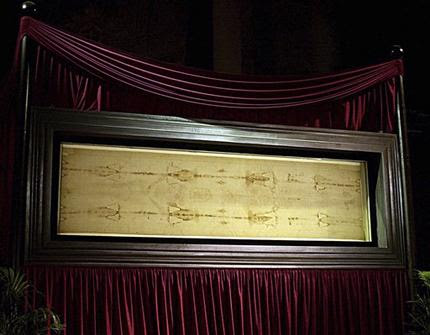 One of the last things Pope Emeritus Benedict did before abdicating was to order a brief exposition of the Shroud of Turin for Holy Saturday.  Although it will not be a major public event, I think only a selected number of people will actually view it - groups of sick people and the young among them, Benedict's order includes live transmission of the exposition and a visual recording so the whole world can join in.
This comes at an appropriate time, not only because it is the Triduum, but a new investigation by scientists at the University of Padua has revealed that the Shroud dates from a period between 300 BC and 400 AD, increasing the chances of its being authentic.   This overturns the carbon dating tests which dated the cloth to the Middle Ages.  This is good news.  While our faith does not depend on the authenticity of any relic, the Shroud offers us a profound meditation on the passion and death of the Lord.  It is also a frontier where science and faith work together, undermining the secularist myth that the two are incompatible an that the Church rejects scientific research.
In other news: there was an extraordinary statement from the Irish Bishops in response to the government's plans to introduce gay marriage in Ireland.  The Bishops in their submission to the Constitutional Convention (a group of people who have been empowered by the government to look at the Constitution and see what needs updating, scrapping or rewriting) they have indicated that if marriage is redefined and gay marriage introduced, the Catholic Church will no longer assist or facilitate the civil aspect of Catholic weddings.
At the moment we priests conduct the civil aspects for those couples we marry in Catholic ceremonies - that will cease if the government goes ahead with its plans.  Apart from a taking a stance, it will inconvenience the State: we save the government money as we cover most weddings.   If the Church withdraws the State will have to provide more registrars as Catholic couples will have to attend a separate civil ceremony as well as the Catholic one.
I note the media, as ever, stretch to present the story in as negative a light as possible for the Church - I note the Independent describes the action as a "boycott".  It is not boycotting, it is no longer extending a favour to the State, one which, given the growing call for complete separation of Church and State, may well be long overdue.
Despite its aggressive attitude towards the Church in recent years, the State actually depends on the Catholic Church in many areas of life.  For one thing, it depends on our charitable works to help the poor.   Working with a Catholic charity I often come across government officials sending poor people to us to supplement their income when government benefits fall short of the needs of individuals and families.   You don't hear about that in parliament.
Posted by Father Director at 11:42 AM