A Modest Proposal For Priests 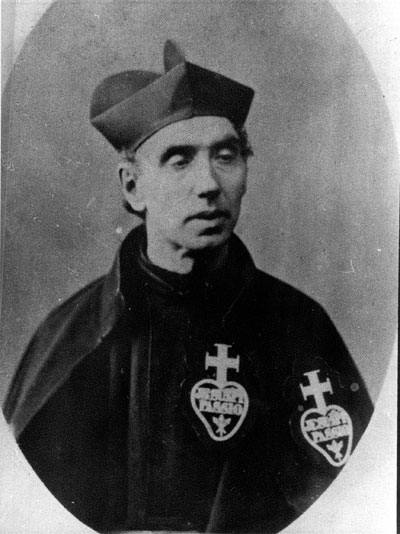 Today is the feast of St Charles of Mount Argus, Ireland's most recent Saint (and only the fifth Irish Saint to be canonised, and only the second since the Council of Trent - I call him Irish, even though he was Dutch because he became "more Irish than the Irish themselves"). I have blogged on St Charles before, so I am not going to give a biography. However I would like to reflect for a moment on a possibility, what I might call, after Swift, a modest proposal.

I believe that St Charles might well be an ideal candidate for Patron Saint of the Irish Clergy. Why do I say that? Surely, you might ask, priests already have a patron in St Jean-Marie Vianney. Yes, we do, the holy Cure of Ars is the universal patron of all priests. However, following the example of our English brothers, we could also have a national patron. St Thomas a Becket is the patron saint of the English clergy, his heroism in defence of the Church and the faith is offered to the priests of England as a model for their priesthood.

In a similar way St Charles could be offered to us as our patron. His ministry was one of humble service to the people of Dublin and beyond. Living his priestly vocation in simplicity and selflessness he was renowned for his offering of Holy Mass which was nothing short of mystical - he celebrated Mass like St Pio of Pietrelcina. He spent hours in the confessional, gently guiding souls, and he spent most of his day blessing the sick and the poor who came to him. Prayer was at the heart of his life and he nurtured a life of loving fraternity with the members of his community. Devoted to the Passion of the Lord he carried his crosses with courage and patience, and his deep devotion to Our Lady gave him an ever more loving heart and tender disposition. Such virtues are worth venerating and living in the priesthood.

But why, some might ask, should Charles of Mount Argus, a Dutchman and a religious be offered as a patron for Irish priests? Surely an Irishman would be better and most importantly a secular priest. Why not St Oliver Plunkett? And why not? St Oliver was a priest of my diocese, one who, like St Thomas a Becket was martyred for the faith and his fidelity to the See of Peter. However, I see providence in the canonisation of St Charles: he was raised up at the very time the priesthood in Ireland was torn apart, demoralised and disgraced after the dreadful revelations of child abuse. This is one of the reasons, I think, his glorification went unnoticed by many - we were all so caught up in the awful events that were unfolding that other Church events did not seem to register. Yet, as I noted at the time, St Charles was raised up in our midst. Perhaps this was a kairos moment, a sign from God to the priests to our land at a moment of profound suffering for many.

Another reason is that St Charles is the most modern of our priestly Saints and his ministry was carried out in very much the same way as many of us minister today. His priestly life, which we know in detail, was ordinary - there were no great dramatic events as in the life of St Oliver. He lived out his priestly ministry quietly enough, his heroism emerging from his daily generosity to God and the people in his care. This is like so many of our priests in Ireland: hardworking, simple men who get up early in the morning, work throughout the day, most of it hidden work, unknown even by many of their parishioners, and then falling into bed often very late. It is a life that can wear a man down if he is not careful, if he does not set time aside for prayer, meals and recreation. St Charles's ordered life of prayer, meals, recreation and work can remind us secular priests that order and balance are vital for the priestly life.

But why a religious? Well first of all a priest is a priest, and priestly life lived well, heroically well, is a model for priests regardless of the habit or cassock he wears. Besides, his spirituality of the Passion of the Lord, part of the charism of the Passionist Congregation, is one we priests need to nurture in our spiritual lives, after all we are reminded in the rite of ordination that we are to model our lives on the mystery of the Lord's cross. We need to remember that every day, especially when things get on top of us. We need to learn how to embrace the cross, become the Cyrenian, and find freedom rather than languish in chains. St Charles is a good teacher in this regard.

And why a foreigner? Well, God saw fit to send this holy Dutchman to our land to minister in our midst as he once sent a Roman Briton. There is providence in that, I think.

I suppose this may well be just another post, read by some and forgotten. If so, so be it. I am just sharing a few thoughts I've been reflecting on since St Charles was canonised in 2007. It would be nice if some took heed of it and went with the idea. But it would be great if people took note of it and got to know St Charles better and prayed to him. It would be brilliant if priests, Irish priests (and bishops, let us not forget our bishops), took note, get to know Charles and find in him a friend, teacher and intercessor.
Posted by Father Director at 7:01 AM