The Meeting At The Well 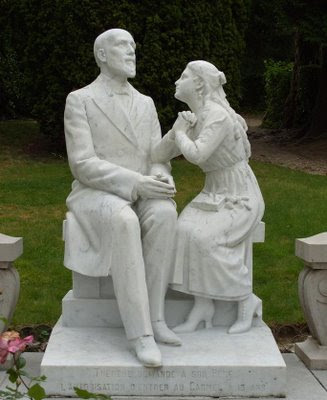 Our parish reading group, The Interior Life group, are studying St  Therese's Story of a Soul - it is proving very popular and members of the group have many insights to offer. I get great enjoyment out of the group. One of the joys I am experiencing at the moment is the discovery by some that St Therese as she really was/is is very different from what they thought she was/is. The plaster statue of the "little flower" has led people to think of her as sentimental and rosy all the time. The reality, of course, is very different - she was wild, profound, strong, intelligent, direct, a woman of enormous substance. And she was not always the saint she became - she may have been a very different, a less virtuous woman had it not been for the Christmas grace.

This evening in our reading one event stuck me forcibly (we were discussing chapter five - that which deals with the Christmas grace, her intercession for Pranzini and her attempts to get permission to enter Carmel at fifteen) she came to ask her father for permission to enter Carmel as he was sitting by a well in the garden of Les Buissonnets. Though I have read the book many times, I had not noticed the well ! Wow ! How biblical is that ?!

As you know in Scripture the well was always associated with betrothal and marriage. When Abraham sent a servant to look for a wife for his son Isaac, the servant met the future wife, Rebekah at a well. Jacob met his wife Rachel also at a well - and it was at that same well that Jesus met the Samaritan woman in an encounter resonating with images of betrothal and marriage - the marriage of the soul and the Church to Christ. Moses also met his future wife at a well. So the Jews - and Samaritans, venerated (if I can use that word) the well as an image of espousal.

And so we have Therese, intent on becoming a bride of Christ, desiring to be betrothed to him, coming to her father at the well to seek his permission. The contract was negotiated there, Blessed Louis consented, and the bride-to-be rejoiced. They then went for a walk around the garden where Blessed Louis gave her the little flower, its roots intact, which St Therese took as a sign of her vocation - the little flower being uprooted from this garden to be planted whole in a new garden, the garden of the Lord.

I wonder if Therese ever made the connection?
Posted by Father Director at 10:05 PM