A Life Of Great Innocence 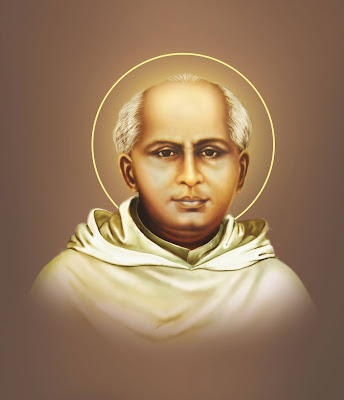 Today in Carmel we celebrate the feast of Kuriakos Chavara, this year, for the first time, as a Saint: he was canonised last November.

Here is some of the testimony left by his spiritual director, Fr Leopold Beccaro, OCD, we use this as the second reading of our Office of Readings today.

"Today, Tuesday, January, 3, 1871, at 7:15 in the morning, Fr. Cyriac (Kuriakos) Elias of the Holy Family, the first Prior, died after a life of great innocence. He could declare before his death he had never lost his baptismal innocence. He was exercising himself in the practice of virtues, especially in simplicity of heart, living faith, tender obedience, and devotion to the Most Blessed Sacrament, to the Blessed Virgin Mary and to St. Joseph. He has undergone immense hardships for the good of the Christians of Malabar, especially during the time of the schism of Rochos, when he, having been appointed vicar general of the Syrians, showed his extraordinary devotion to the Holy See. He fought day and night to arrest the spread of schism from which he would save no less than forty parishes. On this account the Holy Father Pope Pius IX sent him a letter expressing his great satisfaction. He was the founder and the first Prior of the Carmelites of Malabar. He founded also the convent of nuns after undergoing many hardships. On account of his endearing virtues, learning and profound knowledge of the Syriac language he enjoyed great influence on the Syrians of Malabar. He was always greatly loved by the Vicars Apostolic of Malabar, and even more by the people of Malabar, the gentiles and Nestorians not excluded. He endured his last illness for two years in a spirit of great resignation, nay with joy. He was detached from all disorderly affections for earthly things, which was all the more true in the last days of his life. Having received the last sacraments with extraordinary piety and devotion, in a heavenly joy, and amidst the tears of all who knew him, especially my own, who knew him even as myself, he breathed his last at the age of sixty-five and was buried in the church of St. Philomena at Koonammavu. O holy and beautiful soul, pray for me."

St Kuriakos, pray for us all. Greetings to all my Carmelite brothers and sisters in India! St Kuriakos's tomb.
Posted by Father Director at 7:01 AM