The Smallest, The Least, The Greatest What a wonderful Saint we celebrate today: the humble and beautiful St Juan Diego, visionary of Guadalupe. Our Lady, in her visions to him, called him the humblest and littlest of her children, and if so, then following the Lord's teaching on the least, he must be one of the greatest Saints in heaven.

As she usually does, Our Lady chose the smallest to proclaim her message; she entrusted to him not only the building of a church on Tepeyac, but what was in reality a major evangelical thrust which led to the conversion of millions in Central America. His poor tilma would bear the image of the Mother of God miraculously imprinted and preserved on it, and it was this image which touched the hearts of the people of Mexico and led to their conversion. Juan Diego himself would also touch the hearts of those who came to the new shrine of Our Lady through his humility, his holiness and his simple life. The last seventeen years of his life were spent proclaiming the message of Our Lady and interceding for those who came seeking her help.

As one expects these days, some have questioned whether Juan Diego even existed - this was an attempt to undermine the authenticity of the apparitions - no Juan Diego, no visions. However there is enough evidence of his existence and a long history of devotion to him. There is also an extraordinary miracle worked through his intercession which led to his canonisation (Fr Z has the story of it here). So if you are one of those led to doubt his existence and the wisdom of the Church in promoting devotion to him, be assured and commend yourself to his prayers.

Let us ask this the humblest son of the Mother of God to pray for us and help us to become the littlest, the smallest, the least, devoted, like him, to God and willing to serve him as Our Lady served him. 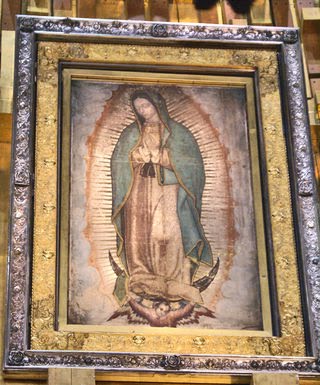 St Juan Diego's Tilma with the miraculous image of Our Lady imprinted on it.
Posted by Father Director at 7:00 AM