The Last Saint Of The Year

As we count down the hours to the end of the year and the beginning of 2015, we commemorate the memory of Pope St Sylvester. He is not one of those popes who jumps suddenly to mind and yet his pontificate was important because it was he who guided the Church from a state of persecution to being a Church of the Roman Empire, Reigning from 314 to 335 he saw the implementation of the Edict of Milan and the Council of Nicea, the decrees of which he approved. So he is an interesting Saint to commemorate at a time of transition.

Little is known of his life, we know he was a Roman by birth. During his pontificate he had to deal with the Emperor Constantine, an ambitious and proud man who would gradually seek to gain more power and control over the Church. Sylvester, it seems, was wise in his dealings with the emperor. He was responsible for building the Basilica of St John Lateran, making it his cathedral, among other building works around the city. He was also the pope who had to deal with the most serious of the Christological heresies, Arianism. That battle would not be won for centuries, and it still continues to raise its head today.

There are many legends concerning Sylvester, most are probably not even founded in fact. One of my favourite concerns his battle with a dragon. According to the story the dragon lived in a pit near Rome and was known to kill men with his breath. Constantine fearing the creature sought the help of the pope who went out to the pit and going down sealed the dragon's mouth closed with thread. The pope had been followed by two enchanters who wanted to see how Sylvester would deal with the creature. They were converted on the spot. We are then told that the pope raised from the dead those who had been killed by the dragon's breath.

The legend is delightful, certainly untrue in its literal sense, but true in its allegorical sense, for it can be seen as a celebration of the end of persecution and the blessing Christianity would bring to Rome, bringing life to souls quashed by paganism and the evil one.  This allegory can prove useful to us too in these times. We are called to faith, to trust God: evil has been overcome. That is a message of hope for us at the turning of the year. So let us celebrate this feast, and the night that comes, the "notte di San Silvestro" as it is known in some places. With this saintly Pontiff let us look forward, as he did, faithful to Christ, zealous to proclaim his Gospel and step forward in hope to the New Year. 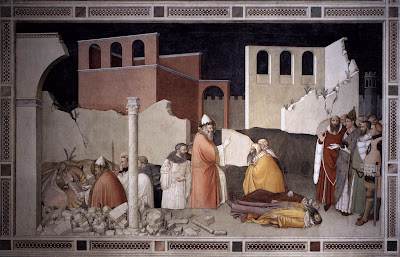 Posted by Father Director at 6:43 AM