In his recent memoir, Race With The Devil, academic and writer Joseph Pearce, in recounting the story of his conversion from militant right wing activist to Catholic, cites one incident as highly influential in his conversion.   Following what he saw as a breach of his human rights he approached the National Council for Civil Liberties (NCCL) the British equivalent of the ACLU, to seek advice.  As an extreme right-wing activist he believed the NCCL was nothing more than a left-wing liberal organisation interested only in pushing its own libertarian agenda, but he was willing to give it a go.  To his surprise the man who agreed to listen to him was Jewish and to Pearce's surprise, he was willing to take the case.  Why a Jewish man would seek to defend a little fascist intrigued Pearce - it seemed the man was really interested in human rights.  However, Pearce's initial view of the NCCL was correct, the man was overruled by the NCCL - they would not take on the case.  To Pearce's astonishment the Jewish man resigned in protest.  Why?  Because, using Voltaire famous words: he did not like what Pearce said, but he was willing to defend to the death his right to say it.
Well, such noble sentiments are rare in the modern, secular world where intolerance and censure has become the norm for those who hold values that challenge the prevailing ideology. And today we have example of this as an Irish University suspends a Catholic organisation because people do not agree with society's defence of purity.  The National University of Ireland at Galway (formerly UCG) has suspended the college branch of the Legion of Mary because the Legion was promoting chastity within the context of homosexuality.  It claims that in doing so it is protecting the liberty and equality of all students.

It seems the Legion praesidium on campus was merely promoting what the Catholic Church teaches with regard to all people, even those with same-sex attraction: chastity and purity according to one's state in life.  To see this as an option for those with same-sex attraction seems to be interpreted as discrimination.  I note that the phrase which caused most offence to those who made the complaint against the Legion was one which promoted "an interior life of chastity" - that, my friends, is considered to be "homophobic" by the folks over in NUIG.
I am a graduate of the National University of Ireland (NUIM), and to be honest I am very disappointed with this action by NUIG.  In fact I see it as an assault on liberty and equality.  In reality those who have suspended the Legion are seeking to silence opinions they do not agree with and for that the university deserves condemnation.  Those in the university who have issued this diktat are a disgrace, they have committed an affront to academic freedom and the right to free speech.
Free speech is not about allowing/permitting/promoting those opinions we agree with, it is about tolerating those we do not agree with, no matter how much those opinions offend us.   Of all places, one would expect an academic institution to understand this.  Sadly, given that our universities are now monolithic with regard to ideology, for the most part, there is little tolerance for other voices.  Universities seemed to have moved from places where independent thinking was encouraged to institutions for the indoctrination of future generations in a particular left-wing libertarian ideology.
I notice, however, as revealed in another article, the Legion was working in conjunction with Courage Ireland, a noble organisation that works with same-sex attracted people and helps them to live chaste lives in accordance with Christ's teaching and the teaching of the Church.  It has had considerable success in this area, and for this reason it is despised by militant homosexual groups.  Courage in Ireland is doing great work, but it has to operate way below the radar because Irish gay militants have tried to infiltrate and destroy the groups.  It may well be that it was the Legion's promoting Courage that infuriated certain individuals.   The Legion is often ignored by ideologues and regarded by some as a harmless clatter of old fashioned simpletons (anything but!), but perhaps an alliance with an effective pastoral initiative was too much for some over in NUIG.  Perhaps the problem was not discrimination, but rather the real possibility that some people might actually listen to what the Legion and Courage had to say, and in the current ideological climate that is not permissible. 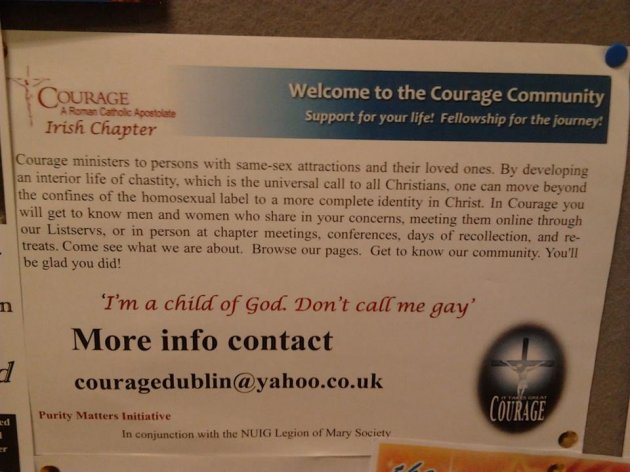 In this action the NUIG is not protecting the liberty and equality of all students, it is cossetting the prejudices of a particular group.  There are those who believe homosexuality is normal and they want to be free to live such a lifestyle, and then there are those who believe otherwise and are willing to meet and work with homosexuals who are disillusioned with the gay life and agenda: if we are supposed to be tolerant and mature, why promote the gay group and persecute the other?  No, the university's decision is not about liberty and equality, it is about silencing people who do not adhere to the new orthodoxy of sexual libertarianism.
If you wish to make your views known to UNIG, you can contact the president: Dr James J Browne, President, National University of Ireland Galway, University Road, Galway, Ireland.  Telephone: 00 353 (0)91 524411.
Posted by Father Director at 11:24 AM