The Vision of St Nicholas 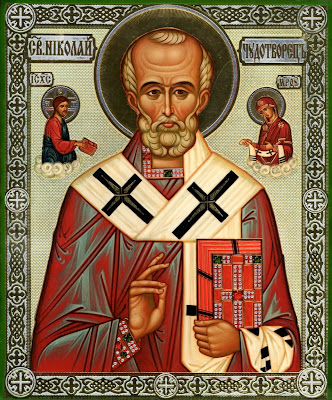 The feast of St Nicholas!  In previous years I have reflected on St Nicholas's passionate defence of the divinity of Christ which led to his losing the run of himself and bashing Arius at the Council of Nicea. As you know, Nicholas spent some time cooling off in a gaol cell.
Well interestingly, last year at the Belfast Christmas Market at City Hall, I fell across a lovely icon of St Nicholas (see above), and in the two top corners are the figures of Jesus and Mary portrayed in the way they appeared to him as he was languishing in prison.  Draped over Our Lady's arm is the omophorium, the symbol of a bishop in the Eastern Church.  Nicholas regretting his rash actions prayed for forgiveness, and in response to  his prayer he received this vision and the grace of Our Lady herself returning his episcopal robe to him.  (You can read the whole story here on this site dedicated to the saint).
While we might secretly take delight in the saint's action - it reveals his humanity, and we can reflect on the many stories from his life, but I think this prison vision is the most wonderful event in Nicholas' life.  He made a mistake - he was right in his defence of the faith, but wrong in resorting to violence even if Arius probably deserved a good beating.  He prayed for forgiveness, and he found it revealed in what is a tender vision.  Jesus, revealed in his divinity and humanity, and Mary coming as a loving mother to her child.
This is most consoling for us.  This event in Nicholas's life can inspire us not to fear God when we have sinned, but rather to return to him and ask forgiveness: if we do so, we will certainly experience his tenderness and love.  If God decided, out of love for us, to become man and to die on the cross for us, then he will certainly be open and welcoming to those who come to him seeking forgiveness.
Posted by Father Director at 7:01 AM