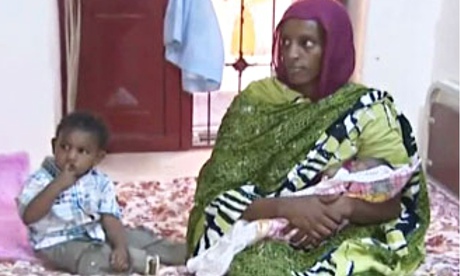 The story of Sudanese Catholic Meriam Ibrahim has taken another twist as the authorities have now charged her again, this time with document fraud. Authorities have claimed that her travel documents have been falsified: because she uses her Christian name rather than the Muslim name she had when a child, the authorities claim this is fraud. It may well have been lack of prudence on her part, but these charges seem as ridiculous as the original ones which saw her condemned to death. She will not be permitted to leave Sudan and will probably face trial again. She's out on bail for now.

The authorities in the Sudan are determined to get this woman one way or another and it seems to me, and to many others, that the source of their animosity is her being a Christian. The extreme Islamic regime in Sudan will not permit freedom when it comes to religion, and certainly not to those Muslims who hear the call of Christ and seek to enter into his Church. Meriam's story is just another example of what many Christians are suffering in many parts of the world.

Let us continue to remember her in our prayers. For us in countries where many Catholics drift through their lives barely acknowledging what Christ has done for them, Meriam's faithful witness to the Lord and his Gospel is a wake up call.
Posted by Father Director at 6:25 PM