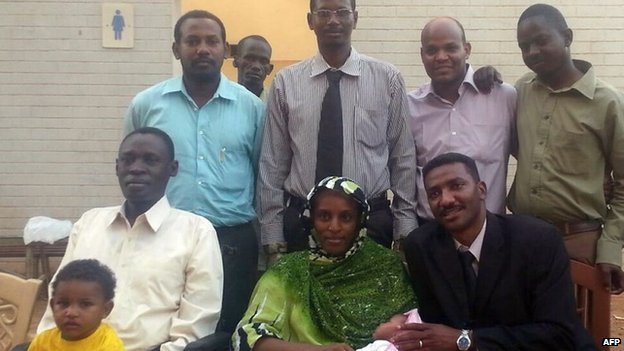 Just hours after she was released, Catholic woman Meriam Ibrahim has been arrested again, this time with her husband and their children, son Martin, 21 months, and month old daughter Maya, born in prison. The family had been waiting at Khartoum airport for a flight out of Sudan. According to reports the family were taken into custody by forty National Intelligence and Security Service agents, dubbed the "Agents of Fear".

As you know Meriam was condemned to death by a court in Sudan having being found guilty of apostasy and adultery. Meriam's father was Muslim, and even though she was baptised and brought up as an Orthodox Christian, under Islamic law she is considered a Muslim and so she is considered an apostate. For marrying a non-Muslim man, she is considered an adulteress. Meriam entered the Catholic Church prior to her marriage to American Daniel Wani.

No reason has been given for the family's arrest. Let us pray for this poor woman, our sister in faith, who has given tremendous witness to her Catholic faith. Whatever is going on, let ask Our Lady to assist this family and ensure that they can get out of Sudan and back safely to the US. We should also invoke St Josephine Bakhita, Sudan's Saint.

Following this story over the last number of months I am puzzled by one thing: why the silence from the White House? Given Barack Obama's concern for human rights, why has he and his wife, also well known for her activism, particularly in area of women's rights, said nothing? See Fr Longenecker for some thoughts on this one. I presume now that an American citizen has been taken into custody someone in Washington will have to do something.

UPDATE: News is coming through that Meriam, Daniel and their children have been released. Let's pray that they will be free to leave the Sudan as soon as possible. A prayer of thanksgiving to Our Lady and St Josephine, and continued petition for their safe exodus.
Posted by Father Director at 3:33 PM