The Prophet Of Life: Our New Intercessor 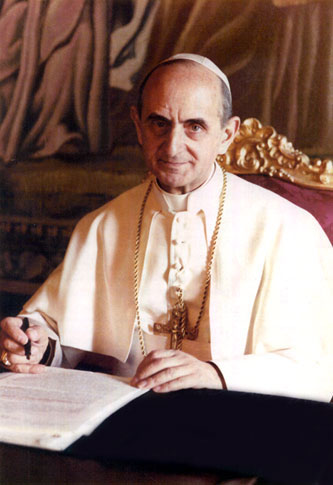 In Ireland we have a saying: you wait for ages for a bus to come and then three come together. Well, it seems that in the Church we have such an experience now as, following the canonisation of Sts John Paul II and John XXIII, the beatification of the Venerable Paul VI has been announced. The Cause of the Venerable Pius XII is also at an advanced stage as a miracle is now being examined. Some are critical of these glorifications, I even hear talk of "canonising Vatican II" - I will refrain from commenting on that particular slant. It needs only to be said that God has spoken in the case of St John Paul and the Venerable Paul VI in the language of miracles. Pope Francis decided to use his prerogative and canonise St John XXIII without need for a miracle, but God had spoken of his will with regard to Pope John in the miracle for his beatification.

The response to Paul's beatification has been mixed, as one would expect. Many welcome it, many more traditionally minded are not so keen, and there are some who know nothing about him. If you are a regular reader of my blog you will know that I welcome the announcement and, God willing, I may even get over the Rome for the ceremony. Paul is a controversial figure, his papacy was a difficult one both for him and for the Church. With the closing of the Second Vatican Council and the promulgation of Humanae Vitae Paul faced incredible challenges, some of which seemed to overwhelm him. Though some might dispute it, it was in his suffering, I believe, that Paul was sanctified. A man who sought to persuade rather than coerce, he found that he could not convince many in the Church, both liberal and traditionalist, left and right, to see things as he saw them. As traditionalists rose up against the Council, liberals rose up against his reaffirmation of orthodox Church teaching on life: Paul stood in the middle trying to reconcile, suffering and facing a heavier cross as his papacy developed. His death in 1978 was a blessed release for him coming suddenly after the brutal murder of one of his closest friends.

I won't get into the controversies here, but I would recommend you read Fr Alexander Lucie-Smith's brief but comprehensive article on Paul's papacy, he sums it up very well. Paul's beatification is most timely. It will conclude the Synod on the Family which may well be a difficult and contentious affair, perhaps bringing the Church into another Humanae Vitae moment. Pope Francis may well have need of the example and intercession of Blessed Paul. It is timely for other reasons, among them the various challenges we face as Christians in an ever increasing secular world. The Pro-Life movement must surely welcome the beatification, for Paul is a prophet of life; he suffered for the cause of life, and I hope he will indeed be numbered among the patrons for the cause of life. I would urge those involved in the pro-life cause around the world to come to Rome for the beatification. Our presence at the glorification of the prophet of life would not only send a statement around the world, but also be a moment of encouragement for all of us.

Pope Paul died on the feast of the Transfiguration, a feast which celebrates that mysterious event in which Jesus prepared three of his apostles for the scandal of the cross with a glimpse of his divinity. Paul was sustained by his faith in the Risen Christ, he carried his cross with his heart set on the heart of Christ. We can say now, surely, that on that day when he closed his eyes, Paul opened them to gaze upon his transfigured Lord for ever. His own cross passing away to the joy of eternal life in the house of the Father. From that house I pray that he will look down upon us in these difficult times and intercede for us: that we may carry our cross with faith and seek to be authentic witnesses to Christ even if it means suffering.
Posted by Father Director at 6:55 PM