On The Naming of Monuments It seems the new bridge across the River Liffey in Dublin City is to be called after Rosie Hackett.  "Rosie who?" I hear you say.  Yes, that was my reaction too at first - I never heard of her.  It seems she was a trade unionist and took part in the lockout in 1913.  As I know nothing about her I cannot comment on the decision, but I am sure my initial reaction will be shared by others - she is not known by many Irish people today.
I think it is a good idea to name the bridge after an Irish woman, as pointed out in one article there are only two bridges in Dublin named after women: Sarah's Bridge at Islandbridge and the Anna Livia Bridge at Lucan.  Anna Livia is the name given to the "goddess" of the river.  We have plenty of heroic Irish women who need to be honoured: where is the monument to Countess Markievicz?  Or the statue of Queen Medb - the British have a rather interesting statue of Boadicea in London, why can't we draw our citizens' attention to our ancient heroes.  I think a nice statue of Queen Medb with a big bull would be nice outside and facing Leinster House.  The sharp horns of the animal might be a sobering image for our public representatives as they go about their daily business.
Dare I mention our great Christian heroes?  Matt Talbot has a bridge and statue down at the Customs House, but a few more nods to our great Christian past (and present!) would be nice.  One of those suggested for the new bridge was Frank Duff, founder of the Legion of Mary, I doubt in the present climate that nomination was seriously considered, even though Frank was quite vocal in the defence of children and women in institutions.
One last thing, I was not too keen on naming the last bridge over the Liffey after Samuel Beckett.  I think Beckett was a great literary figure and he should be honoured, but when I look at the bridge (which I think is a most beautiful piece of work) I think it should have been named after our great composer and harpist O'Carolan.  He was blind, so it could have been a monument to an great Irish musician, to Irish musicians in general and to the wonderful achievements of our disabled citizens.  Here is a photo of the bridge, what do you think?  Does that not look like a harp?

And finally, of all the statues and monuments in Dublin, one of my favourites has to be that which honours the ordinary women and mothers of Ireland: 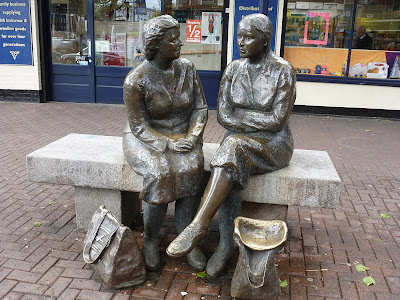