In a recent meeting with a priest friend of mine I was introduced to a new Irish saint - one I had never heard of, though perhaps many of you will already be aware of him.  My friend was telling me of his visit to Lucca and there discovering that in one of the Churches was the tomb of an Irishman honoured as a Saint in the city.  He and his companions eventually tracked the Saint down - to the Basilica of San Frediano - and the Irishman is Frediano (or Fridianus or Frigidianus): he was bishop of Lucca.   Knocking on the door of the Basilica, my friend was admitted when he told the custodian that he was an Irish priest seeking out the Irish Saint.  With great pride the custodian led the little group to the High Altar of the Basilica and removing a frieze in front of the altar revealed the remains of the Saint dressed in episcopal vestments, mire and crozier.
So who is St Frediano?  Apparently he was a prince, the son of an Ulster ruler,  one account says he was the son of King Ultonius.  Having discerned that he was called to serve God he entered the monastic life, studying  under St Enda and St Colman, after which he was ordained to the priesthood.  Sometime after this he went on pilgrimage to Rome. Once in Italy he decided to become a hermit, in good Irish fashion, and he settled on Mount Pisano near Lucca.  The holiness was such that he came to attention of Pope John III who then appointed him the Bishop of Lucca in 556, an office he carried out with great determination and pastoral skill.  He often went back up to his hermitage to spent time in prayer and solitude.
Frediano was a miracle worker, and a number of miracles are recorded, among them his famous redirecting of a local river saving the city from floods ad irrigating the fields.  During his time in office the city was frequently attacked and pillaged by Lombards.  During one of these raids his cathedral was burnt down, and so rebuilt it.  According to the Roman Martyrology, he converted these Lombards.  He is also credited with founding an order of eremitical canon priests.  He died in the year 588 and was soon afterwards declared a Saint.

St Gregory the Great speaks of St Frediano in his Dialogues (Book 3 Chapter 9).  Here is what he says about him:

But I must not forget to tell you what I heard of the reverent man Venantius, Bishop of Luna, some two days ago: who said that there was, nigh unto him, a man of rare virtue called Frigidianus, Bishop of Lucca, who wrought a strange miracle, which, as he saith, all the inhabitants of that place do speak of, and it was this. Hard by the walls of the city, there runneth a river called Anser, which divers times doth so swell and overflow the banks, that it drowneth many acres of ground, and spoileth much corn and fruit. The inhabitants, enforced by necessity, seeing that this did often happen, went about by all means possible to turn the stream another way: but when they had bestowed much labour, yet could they not cause it to leave the old channel. Whereupon the man of God, Frigidianus, made a little rake, and came to the river, where all alone he bestowed some time in prayer; and then he commanded the river to follow him, and going before, he drew his rake over such places as he thought good, and the whole river, forsaking the old channel, did follow him, and kept possession of that which the holy man by that sign of his rake had appointed: and so never afterward did it hurt any more either corn or other things planted for the maintenance of men.

Note that the Dialogues were written at a tempestuous time for the Church to remind the faithful that God was still working and raising up holy men and women to inspire us.  St Frediano, one commentator has said, is offered to the Church as one who did not collapse under attack, but was faithful in the midst of the storms that swept the Church in the Sixth Century.  So he is in fact a Saint for our times.  Perhaps we need to take heed of St Frediano's rake and see that God is still fixing the course of the Church despite the attacks of our enemies.  And our enemies may well think they can destroy the Church, burn it down: but God will always raise up holy men and women to rebuild.
Well, I think Lucca should be on the itinerary for Irish pilgrimages to Italy: we should really get to know our own St Frediano and be inspired by his life and example. 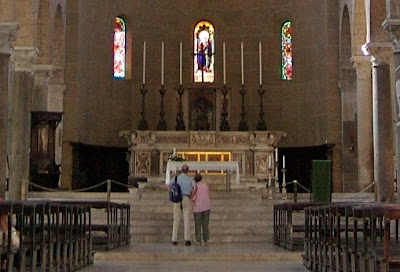 The High Altar of the Basilica of San Frediano, Lucca.  The Saint's tomb is lit up under the altar.
Posted by Father Director at 8:00 AM