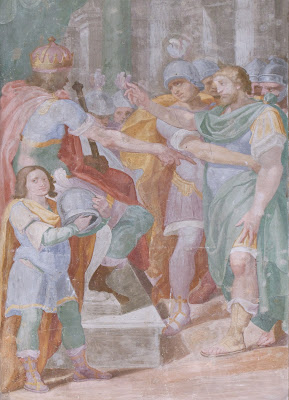 One of the Cure of Ars' most ardent desires was to enter a monastery.  A few times during his years as parish priest, St John Vianney expressed the desire to go and live a life of prayer in solitude and weep for his sins.  This holy man was all too aware of his sins and as he reflected on them there was always a tone of regret in his musings.
We find this regret also in Genesius.  As he is tortured, knowing he is to die he says: "I have come rather late to adore the true King".  We all know that regret - why did I leave it so late?  why did I do that?  People who mature in faith in the later years of their lives lament the wasted years when they could have done so much.  A priest I know regrets the Holy Hours he never made in the early years of his priesthood, but with confidence he says: "But now, some days I do two to make up for the ones I missed".
It is good to express such regret - it is part of conversion and repentance.  However, that regret must be balanced by faith and hope, knowing that the merciful God forgives and can still accomplish his work in us.  Like the workmen hired at the eleventh hour, the Lord will find work for the latecomers and they too can make a difference.  While we must not leave off conversion until we are older - we must follow now, those who come late must never despair, but rather make good use of the time they have.
And this is what Genesius did.  After his conversion, his task was to witness, to endure and to offer his life for Christ, and he did so wholeheartedly.  We may not be asked to do this, but what we have to do for Christ, let us do with the love, generosity and joy of a martyr.
Novena prayers to be found here
Posted by Father Director at 8:00 AM