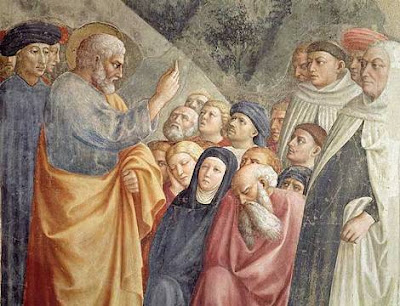 In his Letter, St Peter advises us to be ready to give a reason for our hope (1 Peter 3:15) - to be prepared to explain our faith and why it makes a difference in our lives.  Scripted into his play, Genesius has such a moment.  The author tells us: "When they had completed the sacramental mysteries, and when he had put on white garments, the play seemed to continue with his being taken off by soldiers, and brought before the Emperor to be interrogated about being Christian".  Though pagans, Genesius and his troupe understood that being a Christian was no mere private opinion or state, it is public, and even in time of persecution Christians take their place in the public square and proclaim their faith.
This is an insight many Christians seem to have forgotten.  Living in such a secularised world, and an aggressive one at that, we may be tempted to keep our faith to ourselves be out of fear or a misplaced sense of being tolerant or indeed a genuine desire not to offend anyone. But we must not fall for that temptation.  For one thing secularism, like other movements opposed to Christianity, will soon tire of certain citizens holding personal opinions opposed to the accepted view.  The experience of St Thomas More and Catholics under Elizabeth I of England is a case in point: though told the monarch would not intrude into their conscience, they soon found that that monarch would and did.  The concept of "thought crime" is not new.
We are called to proclaim the faith without fear, and to explain what we believe and why we believe it.  In the world there are many who are tired of a purely materialist and consumerist view of existence, they are looking for meaning.  It is for their sake that we proclaim the Good News of Jesus Christ even if it means offending those who are opposed to us.  Our example in this is the Lord Jesus himself, and we should reflect on how he continued to preach in the face of the anger of those who wanted to silence him: he will inspire us and guide us.  Of course we do so in charity, but also with zeal and with joy.
Novena prayers are to be found here
Posted by Father Director at 10:47 AM