RTE, The Holy Tunic And A Modern Mystic The national broadcaster here, RTE, is in trouble again.  It has been given a slap by the Broadcasting Authority of Ireland for broadcasting an unverified source during the last Presidential election, which made an accusation against one of the candidates - the frontrunner, Sean Gallagher, an accusation which was untrue.  The candidate lost the support of those who were going to vote for him, and Michael D Higgins, RTE's favoured candidate went on to win the election.    The broadcaster discovered pretty quickly, it seems, that the source was not legitimate, but failed to make this known to the public.
If they had, Sean Gallagher may have been elected president.   Will there be legal action?  Such behaviour by the national broadcaster is disgraceful, and reminiscent of Soviet Russia.  This is the organisation we the people have to support through the television licence. Perhaps it is time to look again at that: if this is what we are getting, surely we should not have to pay for it. Is it not time for RTE to go out on its own and make its own money?
Now, some good news.  A relic believed to be the Lord's tunic and preserved a Trier in Germany, is due to go on display for a month from April 13th to May 13th this year; the last exposition was in 1996.  Trier has a number of relics of the Lord including, I believe a nail from the cross and part of the lance.  I'm sure there will be great discussions over the authenticity of the relic, but at least it is an opportunity for us all to reflect in a deeper way on the Lord's suffering, and the tenth Station of the Cross where he was stripped of his garments: the Station of purity - a timely meditation in an age when purity is much maligned.

Holy Tunic exposed in 1996
In the Diocese of Monterey in the US the Cause of a convert from Mormonism who became a mystic is advancing.  Cora Evans (1904-1957) left the Mormons and entered the Church in 1935, having spent ten years searching for the truth.  On 9th December 1934 she was listening to the radio when she heard the Catholic radio hour.  Normally she would have turned it off, but she was too sick and that proved providential.  As she listened all her prejudices against the faith were exposed and challenged. As soon as she was well she made her way to the local Catholic church with a host of questions: the answers convinced her that, at last, she had found the truth. 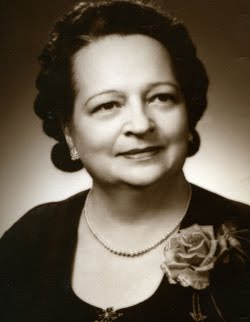 The Servant of God, Cora Evans
Her life was then marked with numerous mystical experiences.  In 1946 the Lord appeared to her and asked her to promote the Mystical Humanity of Christ, and the indwelling of God in the soul - what Blessed Elizabeth of the Trinity teaches in her writings.  Cora was a lay woman, married with a family, so she is somewhat like St Frances of Rome or Blessed Anna Maria Taigi.  We shall watch this one with interest.
Posted by Father Director at 9:58 PM