Of Fathers And Mothers

Last night the Holy Father completed another successful apostolic visit, this time to Mexico and Cuba.   I was watching the farewell ceremony last night on EWTN (of course!).   It was spilling rain, so the ceremony took place inside the terminal building.  No matter where he goes, Benedict charms the socks off people - not something he plans to do, they just see him as he is and realise that here we have a good and holy man, his gracious simplicity touches people's hearts.
This is one of the reasons why he should visit Ireland - actually seeing and meeting Pope Benedict will help undermine the dreadful image the media have created in their hatred of him (I use that word intentionally).  As in every other visit to countries where the Church has been ravaged by child abuse, Benedict would meet victims, usually out of the media spotlight, and listen to their stories.   Not only does this give the Pope a good idea of the problem in a particular local church, but also gives victims an opportunity to be heard by the Pope, and to hear what he has to say.  From previous encounters victims have been touched by such meetings and found great healing.
As for a Papal visit during the Eucharistic Congress, which is definitely ruled out at this stage, I do not believe it would be a good idea for a number of reasons, hence I did not support any petition or call for the Pope to come.
Watching the farewell ceremony and clips of other ceremonies, I see that the Pope is slowing down - but then you expect that for a man of 85.  He used a walking stick as he boarded the plane in Rome, and this has led to all sorts of speculation, and that one glaring question which excites the hearts of journalists everywhere: "Will he resign?"
I agree with William Oddie of the Catholic Herald - I do not think he will abdicate, I think the existence of two popes will lead to problems, confusion, and perhaps even crisis.   I know we have had popes abdicating in the past - the case of Pope St Celestine V is well known, so too the abdication of Pope Gregory XII as a means of ending the Great Western Schism.  But I think, given that they are exceptions, a pope should remain in office until his death.
Why?  you might ask.  There are a number of reasons, which Oddie mentions in his article, but I also believe the office of pope is different to that of other bishops: it incorporates universal fatherhood (Pope comes from papa (Latin) and pappas (Greek) a child's title for father), and as the father in the Church he embraces a call which is much deeper than a mere ecclesiastical office.   Blessed John Paul II understood that, and so said that there was no room for a pope emeritus, just as none of us will have a father emeritus.
Perhaps that all too sentimental.  Some may say, well, what will happen, and it may happen given advances in technology, that a pope becomes incapacitated, develops Alzheimer's for example, what do we do then?  That is a difficult question, and as Oddie suggests, we should pray it never happens.  But what if it does?  Well, then there will be a serious problem, because then the pope cannot abdicate - according to canon law if a pope abdicates, it must be done freely - if he has Alzheimer's, he may not have the capacity to fulfill this requirement.  Can he then be deposed?  That will lead to more problems.
Anyway, lest we drive ourselves nuts with all this, perhaps our efforts are best employed praying for our Holy Father that God will give him the strength to fulfill his office and when the time comes, to take him home quickly to the "house of the Father".   In the meantime, we give thanks for the life, example and teaching of the gentle Pontiff, Benedict XVI: for his wise heart, fatherly love and tender concern for the flock that is in his charge.  Say whatever you like about what people perceive to be "mistakes", we should not doubt that he honestly seeks to serve God and his people faithfully even until death, and wants the best for every man and woman on this earth: life with Christ and eternal salvation.
As for his successor; instead of speculating on who he will be, we leave it in the hands of the Holy Spirit who is already preparing him for his office.  We may just pray for him that the Lord will make his heart big enough to hold within it all the children of God. I discovered a new Blessed a few days ago - I noticed her beatification last year, but did not research her.  A brief biography appeared in the Magnificat a few days ago: Blessed Maria Serafina of the Sacred Heart.  Dom Mark Kirby, who is staying with me, filled in the details: he was present at her beatification because it took place in his ancestral town in Italy. He has a lovely introduction to her life on his blog.
Blessed Maria Serafina was some lady - she was trying to follow God's call for years, facing many difficulties and yet remaining faithful.  God called her to found, and eventually cleared the way for the beginning of her new congregation, the Sisters of the Angels.  I am told that these sisters are still faithful to the way of their foundress and they have that wonderful sense of motherhood which is really at the heart of consecrated sisterhood.  When nuns and religious sisters see themselves as mothers, then they are on to a winner.  A true nun or sister will be a mother to those she meets.  When growing up in Clara, we had many such sisters in the convent.  The Sisters of Mercy had a house in our town, and among them were some wonderful motherly sisters - there were others too, as you expect in a fallen world.   But I was always impressed by the motherly ones.
Anyway, back to Blessed Maria Serafina - for her struggles and endurance, and her devotion to God's will, she should really be the patron saint of those struggling to discern or fulfil their vocation (perhaps also of orthodox seminarians in liberal seminaries!).  The motherly care and intercession of Blessed Maria Serafina might help those who need some sign from God to help them presevere.
And finally, as a Carmelite I cannot ignore this article: Joseph Pearce writes about the man who save the original autograph of the writings of St John of the Cross during the Spanish Civil War.   Roy Campbell is well known for his translations of St John's poems, during the persecution of Catholics, he was entrusted with the care of the papers to save them from the Republicans.  It was the Discalced Friars of Toledo who entrusted the manuscripts to him: a number of these friars were martyred by the Republicans, and they have since been beatified - one of my favourite beati among them, Blessed Hermilo of St Eliseo - I keep his picture here beside me on my desk. 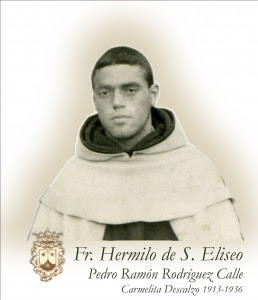 This story is a wonderful tale of heroism, well worth reading.  It is also another reminder that the Spanish Civil War was not as simple as the leftists like to make out.  As we constantly hear only one side of the story - the Republicans, the story of the innocent Catholics - men, women and children - tens of thousands of them, were murdered by the Republicans simply because they were Catholics.  The media ignores their stories while holding up for public veneration the very men and women who slaughtered them.
Posted by Father Director at 8:00 AM