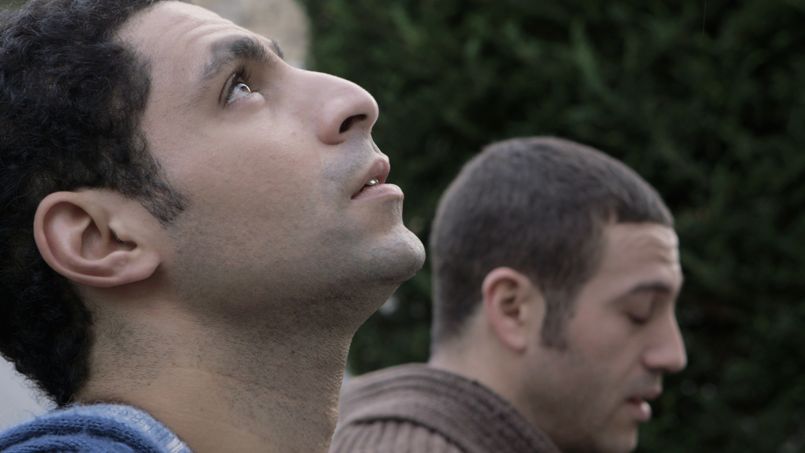 At the St Genesius Film Club in Dublin last night we watched a most amazing movie, perhaps one of the most moving I have ever seen. L'Apotre is a 2014 French film dealing with a young Muslim man's struggle with his gradual conversion to Christianity (Catholicism) and the consequences of that decision for himself, his family and his Muslim community. The film is directed by the young gifted director Cheyenne Carron.

As you can imagine the film is controversial. It deals with its subject matter very sensitively and is certainly not given to stereotypes, reaction in France has been hostile and its release was very limited. Following the Charlie Hebdo killings it has not been shown in France, though it is now availabel on DVD.

The film compares Islam and Christianity, in particular each religion's understanding of charity. The protagonist Akim is a devout Muslim, at the beginning of the movie he is among a group of young men, which includes his brother Youssef, preparing to become Imams. Akim and Youssef's maternal uncle Rachid is the local Imam. By and large there is a positive depiction of Islam here: Rachid is a good teacher, a good man and sensitive towards people of other faiths - we see him correct more hot-headed Muslims. He knows his Quran and explains the various teachings in the suras and verses very well. Akim is certainly taken with this.

However everything changes for Akim when he encounters a murder in the locality. A woman is killed by a neighbour's son. Her brother is the local Catholic priest and Akim hears that the priest, though distraught at his sister's death, will not leave the area because he wants his presence to be a consolation and help to the parents of the murderer (this is actually based on a real situation the director herself encountered). Akim is struck by this act of charity, and it is his reflection and investigation of this act and the faith which inspires it which leads to his comparing it with Islam and his eventual conversion.

One of the wonderful things about the movie is its emphasis on the Catholic faith. There is a beautiful baptism scene - Akim is invited to attend by a new-found Catholic friend, and this ceremony is a revelation to him, and to the viewers I'm sure as it is beautifully done. As Akim reads Scripture his pondering the words out loud remind you of the beauty of the Word of God. The director herself seems to be meditating on the Scriptures as much as her protagonist, allowing the viewer to glimpse the heart of the Christian faith.

As he finally accepts Christianity, Akim tells his mother, she senses he has a secret and she believes that he has fallen in love - he has all the traits of it. He agrees with her, it is obvious at this stage that this is the correct language to describe what he been happening to him. He has fallen in love with Christ and with the Christian faith. For me that sums it all up. That is what being a disciple of Christ is all about: falling in love with Jesus and living that love in his Church.

I cannot recommend this movie highly enough. Apart from anything else, it is a beautiful exposition of what it means to be a Christian and what is expected of a a Christian, and on that alone, it is inspiring.

What is also interesting is that the actor playing Akim, Faycal Safi is himself a Muslim. See an brief interview with him here.

Here is a trailer, without subtitles, but it gives you an idea of what the movie is like.

Posted by Father Director at 7:01 AM